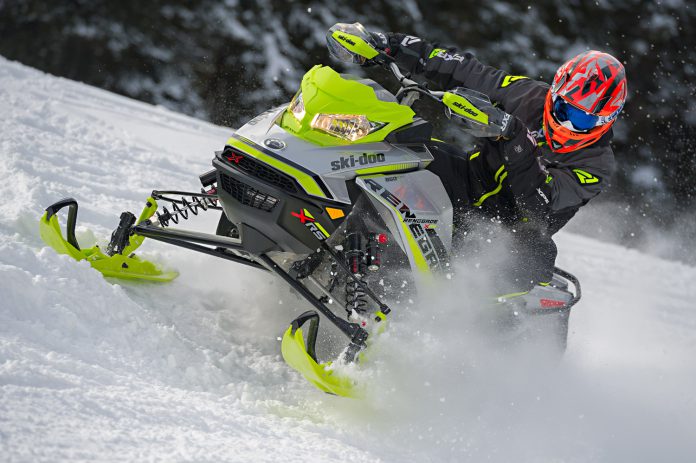 We get lots of comments on articles we post about “fastest sleds”. Interest has amped way up the last two years with the introduction of new powerhouses like Yamaha’s SideWinder turbo , Cat’s Z9000 turbo and Ski-Doo’s 850 E-TEC.

To top all that, Cat is finally offering its long-awaited 800 DSI 2-stroke for MY 2018. These engines are among the fastest ever offered in the snowmobile business and, along with Polaris’ 800 HO, put tremendous focus on sleds that are categorized as “fast”.

The question is: What is “fast”?

Fully clutched out and pulling all the engine’s top end on a hard-packed surface resulting in a very high top speed is usually the definition of “fast”.

This may not necessarily be accurate because it could be the result of the engine being geared higher and the engine’s torque curve allowing the clutches’ calibration to go to maximum shift and pull really high speeds at top end.

The alternate definition is the rate of acceleration a sled can achieve in a set distance – sort of like a drag race. The shorter the “drag strip”, the “faster” the sled will seem when it beats other sleds with more horsepower in a short or pre-determined distance.

There are other factors that come into play, too. Clutching is one of the biggest: If an engine can get its drive system up to top speed by squeezing the primary harder and reaching optimum clutch shift-out, it can overcome other sleds with less efficient clutching but more power. Hardcore drag racers have known this for decades.

Traction is a big factor, too. Even at top speed at the end of the lake, these big, new engines are slipping the track a surprising amount unless you’ve installed some aggressive traction products.

It goes without saying that when accelerating in the drag race scenario, traction is a huge factor and if your rate of acceleration is lost to track slippage, it doesn’t matter how much horsepower or torque your sled is making.

So what’s fast this year? Without question, the two turbos are the fastest in both drag race and top speed situations. The huge torque numbers generated because of the Cat and Yamaha’s turbochargers allow for maximum clutch shift-out faster.

Frankly, even if these engines were producing less horsepower than their claimed 180-ponies, they’d still be faster than the 2-strokes by virtue of their gargantuan torque outputs and ability to squeeze the belt and still pull tall gearing.

Of the 2-strokes, we’ve found the Ski-Doo is fastest by virtue of its pDrive clutch efficiency and extra 50cc’s of displacement – once again, amping up the engine’s torque numbers so it can pull more top end with taller gearing.

Not far behind the 850 are the DSI 800 Cat and the Polaris 800HO. So close is the performance of the three 4-strokes that on any given day one can beat the other depending on weather, traction conditions and clutch tuning.

Kent Lester
Kent Lester is Co-Publisher of SUPERTRAX Magazine and a regular contributor to this website.
Previous articleREACH FOR THE SUMMIT SHARED EXPERIENCES
Next articlePOSSIBILITY OF A CONSUMER G4 600