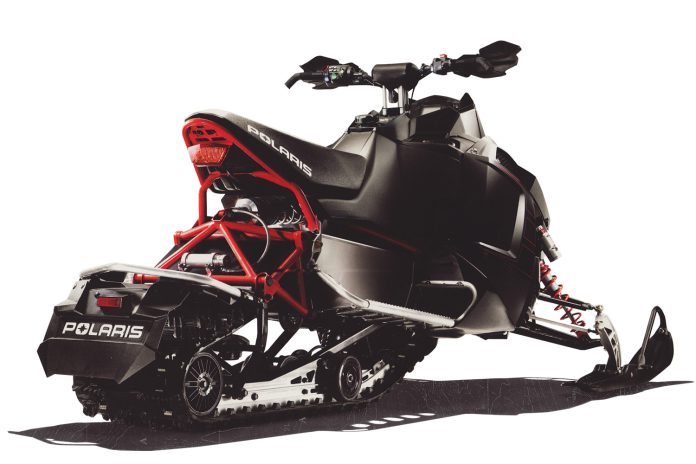 Polaris would like to forget about the 2000s. That decade saw the company lose its focus – and its market share lead.

Near the end of the decade the company clearly experienced a rebirth – more literally a re-enlightenment and as a result a new identity.

The lines intersected when Polaris landed the 2010 RUSH ProRide with the sport’s first production levered, external rear arm shock suspension (Yes, the Snow Scoot arguably had a similar design, but we’re not counting it).

The RUSH was more than a new rear skid, it was a completely new snowmobile chassis using myriad innovations that capably demonstrated Polaris was on the cutting edge of technology and was fully committed to taking back leadership in the industry.

The use of glue in lieu of welds, carbon fiber and aluminum spars supporting the handlepole and a beautifully crafted cast aluminum bulkhead were cutting edge designs that laid the groundwork for more innovation.

Specifically? The Pro-Ride suspension defined the 2010 RUSH. The rear suspension was the first major departure from shock-in-skid designs used since the 1970s.

The idea was marketed on this Polaris engineering claim: The only way to generate a true rising rate response to impacts with a snowmobile rear suspension is to move the rear arm shock out of the tunnel and connect it with the now famous “crank” to a shock mounted on top of the tunnel, under the seat.

The first versions of ProRide were good to their calling. They were truly rising rate and resisted bottoming in a way we hadn’t experienced on a snowmobile.

However, the word plush was not often associated with the original ProRide setup. Polaris listened carefully and altered the design of the ProRide’s moving parts to produce improvements in the system.

These efforts have culminated in the second generation Pro XC external shock suspension used in the all-new AXYS chassis.

Polaris wanted to define its sleds and draw a line in the snow with a unique way of doing suspension. Clearly it accomplished this goal.