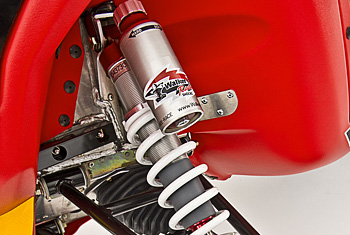 Polaris racers have title-winning power under the hood with the Polaris Liberty 600 twin. It has dual Mikuni Rack TM 40 carburetors, NiCaSil-lined cylinders for enhanced heat dispersion and the Polaris VES (Variable Exhaust System) for optimal power throttle response. The legendary Polaris P-85 clutch manages power distribution and for braking, the race sled has a Cyclone master cylinder and lever teamed with a liquid-cooled Phantom dual-piston caliper.

With a new Independent Front Suspension (IFS) providing easier, more responsive handling, Polaris racers will have an even greater performance advantage as they pursue checkered flags and points titles this winter on the 2011 Polaris 600 IQ Race Sled. Polaris racers piloted the 2010 version of this sled to numerous race wins and season points titles, and they’re looking forward to the improved handling the new 2011 race sled will provide.

“Our racers said if there was anything they would like changed, it would be to make the race sled handle even better,” Wolf said. “We started testing the new front end with some of our racers last season, and continued our testing throughout the winter and into summer. “We ran hundreds of miles on snocross tracks in multiple locations to prove the durability and effectiveness the front end. Racers who rode it love the way it handles.”

Another noteworthy change on the 2011 600 IQ Race Sled is its new front track shock. “The race sled used to have an air shock for the front track shock, but nearly every racer switched to the Walker Evans Needle Shock. So, we made the needle shock standard to suit our racers’ performance needs,” Wolf said. “It’s the exact same technology as riders will find on our RUSH PRO-R models.”

The 2011 race sled also has a different look from those of recent seasons. It will be delivered to racers with bodywork that’s primarily red with black accents, like the 2011 RUSH PRO-R. Each team and racer is free to customize the sled’s graphics to feature their team colors and sponsor logos as long as the Polaris logo remains prominently featured on each race sled.