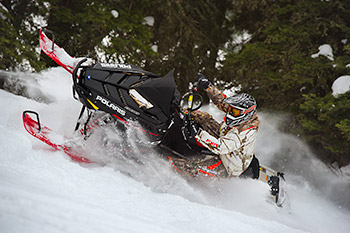 Many of our readers have been asking if we think Polaris will use the jazzed up 2015 Liberty 800 HO in the Indy or RMK in MY2016.

We think there’s a definite possibility this will happen but it’s a bigger deal than first appears on the surface. It’s simply not as easy as dropping the new engine into the “old” Indy or RMK belly.

When the AXYS was designed, Polaris went to a lot of trouble to ensure the engine’s mounting system would provide more rigidity for the chassis and maintain consistent center-to-center distance between the primary clutch and the secondary.

Some of this was to resist vibration but most of it was about increasing belt life when the new engine was producing considerably more power than its predecessor.

The old aluminum strap-style mounting system was scrapped and new cast mounts were built-into the cases. Also, the AXYS bulkhead and new mounts allowed the engine to be positioned deeper inside the belly of the sled to lower its CG and center the engine’s mass better.

The point is this: We think it makes good sense to upgrade the Indy and RMK’s power but it will likely mean a changeover to the whole AXYS front clip, not just a simple bolt-in.

Look for an Indy or RMK that looks a lot like an AXYS, if Polaris has the engine change on its agenda.