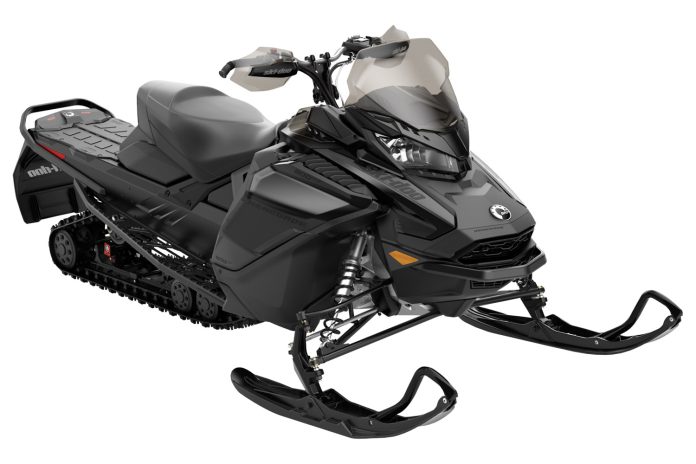 Ski-Doos powered by a 95-hp 4-stroke, certainly fall at the bottom of the performance territory offered by the midrange trail sleds we’re looking at in this series of articles.

However, before getting too critical, you need to compare the power output of this 4-stroke triple to 2-stroke sleds that were being sold by the thousands a few years back.

The extremely popular Yamaha, Arctic Cat, Polaris and Ski-Doo 2-stroke triples and twins a generation ago were regarded as high performance sleds and they all made power very close to this range.

It’s only because we’ve gotten used to riding mid-performance sleds making upwards of 125-130-hp that some of us judge 95-hp as being anemic and insufficient to meet the demands of our current riding style.

The fact is, Ski-Doo is selling this engine in bucket loads and the people who are buying them have nothing but good to say about them. There has to be something to it!

Although the Renegade equipped with this 4-stroke does, in fact, weigh more than its 2-stroke counterparts – especially over the skis – Ski-Doo has done a good job of balancing the weight distribution so the negative attributes of heaviness are dumbed down.

The sleds aren’t plagued with understeer or plowing away from the apex and, in fact, feel quite light at the handlebars, requiring little effort to turn.

The 900 ACE uses the Renegade’s wide-body-style 4-stroke bodywork and the 900 EFI engine is only available in the Adrenaline and Enduro (air suspension on the Enduro) with 137-inch rMotion. The Adrenaline uses non-adjustable KYB gas shocks all around.

One of the reasons owners like this compact 4-stroke so much could have a lot to do with the kind of torque it delivers.

The engine engages its clutches low and builds a gob of power almost off-idle. Unlike 2-strokes, which take some time and RPM to build torque, the 900 ACE grabs the belt and keeps pulling from the time you engage the flipper.

It feels like this engine’s strongest performance takes place in the bottom 2/3s of its RPM range and to a trail rider, that is just about perfect.