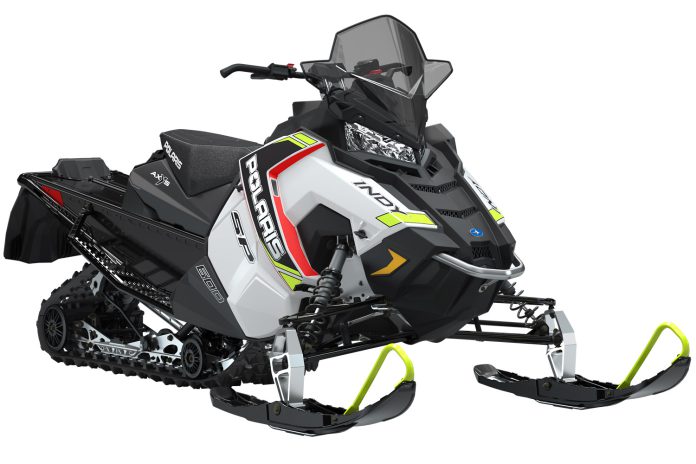 There just isn’t much not to like about the Indy SP. Frankly, if this was the only Indy Polaris offered, it would still be very competitive with other sleds in the 600 class.

As it is, it’s been relegated to being a bargain priced sled that relies more on its bottom line than on its prowess as a great trail sled.

Furthermore, it’s been upstaged by the new MATRYX models and even sleds like the AXYS-based Indy XC and XCR.

The SP is built on the AXYS platform and comes in two track lengths – 129 and 137. Either one performs exceptionally well and combines lightness with great handling and a stellar ride.

Out back, the SP uses non-adjustable IFP gas shocks in its coupled ProCC skid-frame and the same gassers up front.

The tried and true Cleanfire 600 resides under its hood. This Semi-Direct-Injected 2-stroke twin is a strong performer and combined with Polaris clutching, delivers an honest 120-plus horsepower, EPA clean stats and good fuel economy. It even has a decent stock windshield.

Talking specifications with the SP is pretty moot until you’ve ridden it. Handling is razor sharp in either length chassis, the ride calibration is extremely good and the sled has a great “feel” from the handlebars.

The combination of clutching, engine power and the AXYS chassis is well-matched and it makes an even stronger point for shopping for this sled when you consider you’re saving hundreds of dollars compared to the next rung up on the Polaris ladder, the Indy XC 600.

Furthermore, price comparing the SP to a Ski-Doo MX-Z TNT reveals a saving on the 129-inch Indy SP of $1,100 CDN and $600.00 USD. This is pretty substantial considering these two sleds are the base models for each brand and are very similarly equipped. Just FYI, there is no base sled comparable from Arctic Cat.

It’s hard to walk past a sled like the SP that offers so much at such a reasonable price. It’s almost as though Polaris planned it that way!