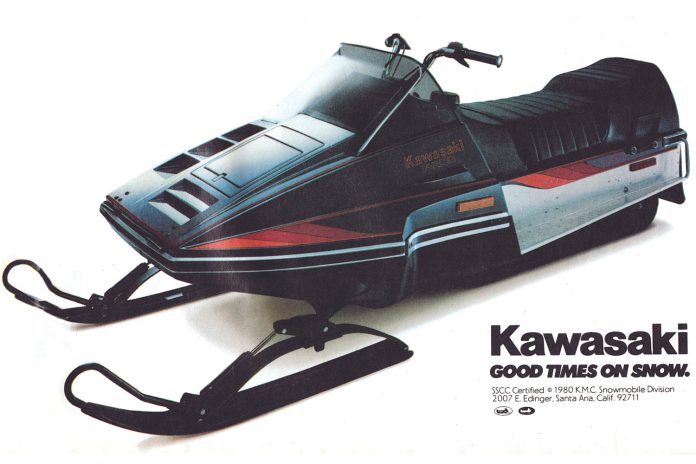 The history of both Sno-Jet and Kawasaki snowmobiles were irrevocably linked together.

Kawasaki Heavy Industries of Japan was under pressure from the USA Division of Kawasaki, desperate to get into the snowmobile business, to get a line of sleds ready for sale by 1977.

When Sno-Jet closed its doors in 1976 there were hundreds of dealers who needed sleds to sell.

Kawasaki saw the opportunity and by 1978 had come up with a model line-up of Kawasaki-powered Sno-Jets with new model names.

Here’s what’s interesting: A contract was signed with Arctic Cat to build many of those early Kawasakis in Thief River Falls, Minnesota, not in Thetford Mines, Quebec, the home of former Sno-Jet. Meanwhile, Kawasaki had opened a plant in Lincoln, Nebraska and was building two new models there, the Intruder and Invader, from 1977 to 1980.

Kawasaki was known for its slick, big-budget advertising and its performance claims that always seemed to work out better on paper than on the snow.

However, the sleds were very up-to-date, beautifully made and had a ton of sizzle, particularly the high performance Interceptor and Invader series.

In early 1982, the Kawasaki dealer show was set to introduce the new 1983 models and just weeks before it Kawasaki Japan scheduled a meeting of its Board of Directors to examine the snowmobile division’s progress.

According to insiders, they were so shocked at the debt the company had accrued and the impossibility of paying it off in the future, they immediately voted to close the doors of that segment of Kawasaki USA. The rest is history.