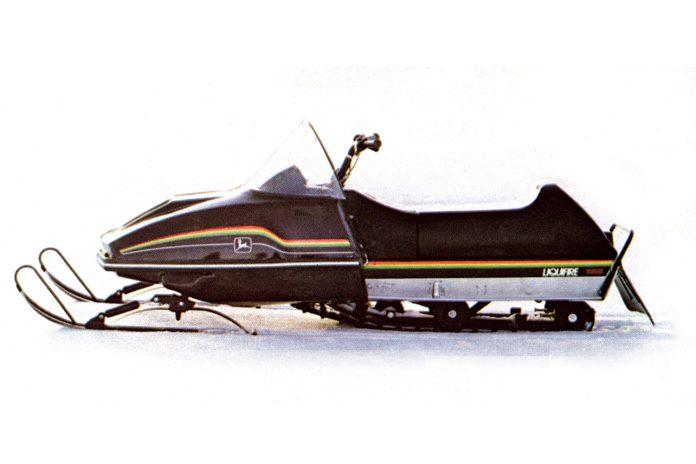 With aggressive marketing and an already-established dealer network in place, sales topped 12,740 units one year later.

From the outset John Deere was passionate about racing and Executive Vice President, Robert Carlson, was its biggest fan.

“Enduro Team Deere” dominated cross-country racing from 1974 through to the end of the decade and Brian Nelson won the 1-500 in 1976 for the brand.

Due to lack of finances Deere’s official race program ended in 1977 but a contingency program for private J-D teams was continued.

John Deere used Kohler and Kioritz (CCW) engines for many years and later went to Kawasaki power. The company had its own clutch brand, the Duster, but used Comets on its highest performance models.

From 1982 to 1984, there was a deep recession and the snowmobile industry was suffering – too many makers, not enough buyers.

Robert Carlson had left Deere and the company merely faded out of the business. Polaris Industries bought the snowmobile-related assets and parts supply.

Supertrax Onlinehttps://new.supertraxmag.com
Check back frequently for new content and follow us on social media!
Previous articleScorpion Sold On Rubber
Next articleAdjusting Your Snowmobile Suspension