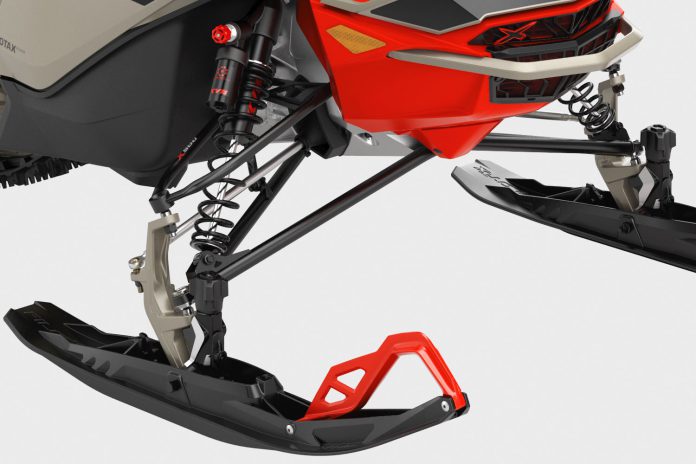 It’s no secret the innovative tuneable (TS) ski from Ski-Doo was a great idea. When the TS arrived about 6 model years ago we praised the concept and the execution as it related to the XP/XS platform. Understand the original TS unit was developed and intended for use on the XP/XS chassis.

The ability to raise and lower the carbide runner in and out of the bottom of the ski meant you could dial in turning response to match virtually any trail condition. The idea caught on like wildfire and we here at Supertrax/Snowtrax sang the praises of this innovation.

In MY 2017 when the first G4 platform arrived, replacing the XP/XS with a radical new further-forward rider position and a completely re-jiggered engine orientation, things became fuzzy.

The issue was this: The TS Ski, which performed so well and demonstrated such versatility, became a handful to tune and achieve optimum steering balance and front end bite.

Compounding this reality was a profound “hooking” response mid-turn, if you dropped the steering carbide too far out of the ski bottom to achieve bite in loose snow. Things got worse when you cranked the carbide back up and into the ski blade in an effort to reduce bite. This counter-action most often netted understeer.

After much trailside fiddling and testing we concluded, as did many of you, the Pilot 5.7 ski and a handful of aftermarket boards were far superior in their response on the G4 and covered a much wider range of trail conditions than was possible with the then current tuneable ski.

Strangely, Ski-Doo was slow to respond to a jillion inquiries about the original TS ski’s performance on the G4 chassis. It wasn’t until last year, before we saw the new Pilot TX ski, that an open admission from the engineering department verified what we had thought all along: The original TS ski was not designed for the G4’s extreme rider forward ergonomics. Okay, we get that, but why keep equipping sleds with skis that are so finicky?

BTW – it was possible to get the original TS units to work on a G4. The problem was exacerbated by the necessity to continually re-adjust the skis as the trail surface changed to maintain optimum handling and on-center balance. Pleasing initial turn-in and mid-corner bite was a continual and most often elusive pursuit.

For MY 2021 Ski-Doo has re-invented the tuneable ski, which is now called the Pilot TX. Changes made to the ski blade profile and carbide are myriad. The ski now has a deeper and longer center keel and uses a longer carbide as well. These two changes amount to a completely new ski and most importantly, a completely different response to tuning inputs. So dramatic are the changes in the ski’s performance, everyone around here noticed the improvement immediately.

The TS-X ski works equally as well on the G4 2-strokes as it does on the 4-strokes. We did experience more push at higher corner entry speeds on the 4-strokes, but that is mostly due to the extra inertia from the heavier 4-stroke engines. This was easily countered by dialling-in more carbide depth.

We are standing and applauding Ski-Doo’s new Pilot TX ski and its performance on the G4 platforms. It delivers a much broader range of response as you move the carbide in and out of the ski blade. Simply put, the Pilot TX is a more forgiving ski. This edition of the tuneable ski works every bit as good as the original TS Ski on the sled it was designed for – the XP/XS platform.

Mark Lester
Mark Lester is Co-Publisher of SUPERTRAX Magazine and a regular Host on Dirt Trax TV.
Previous articleA Tribute To Rob Kincaid
Next articleCOMPETITION HEATING UP IN THE VALUE CLASS!