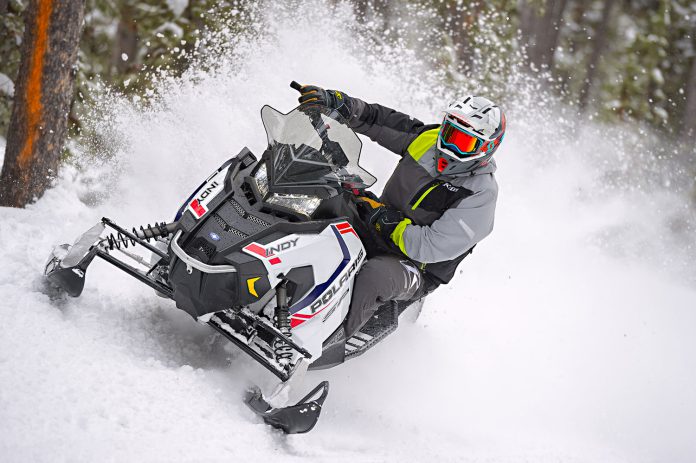 It looks like the industry has caught onto the market’s demand for cheaper priced, well-equipped sleds.

Ski-Doo’s new G4-based 600 Sport is a perfect example of how OEMs can use existing technology to build low-cost but entirely up-to-date weapons that grab the attention of snowmobile consumers.

In Ski-Doo’s case, it went a step further when the all-new Sport included a powered-down version of the 600R twin with EFI instead of E-TEC.

Cat has bought into the trend, too. The new BLAST, featuring a 400cc EFI single and a slightly downsized chassis, is capturing the imaginations of a larger segment of the market.

Polaris may have started the whole trend a couple of years ago with its 65-hp, fan-cooled EVO. This fun, versatile sled has caught on and its super-low pricing allows its owner to step up power and suspension with various “kit” parts to make it appeal to a wider fan base.

Polaris may be sitting on an even bigger powder keg than we realize, however.

We checked the 2021 Polaris brochures and observed the company is still offering the old Pro-Ride (front clip) 600 Indy 121 this year. It’s deeply hidden from view but still exists.

This sled uses a very light but somewhat dated original shock-in-skid platform and is powered by a 600cc Cleanfire twin making 125-hp.

Although we think its suspension could be better, handling is stupendous and its clutching is great. Yep, old technology, but good technology, and lotsa power.

The AXYS-based Indy 600 SP 129 would be an interesting competitor for the Sport but it’s pricing, its 125 HP Clean Fire SDI engine and high tech rear skid doesn’t match the Ski-Doo Sport’s old school SC-5 rear skid and its much lower TBI 85 HP output.

Here’s our proposition – and you can throw this out the window if you like, but we think there’s some credibility here.

What if Polaris offered a value-priced 121-inch 600 Indy SP based on the last AXYS platform and a shortened Pro-CC skid, downgraded to steel bodied gas cell shocks and a 1.0-inch track with a less intense gauge package while keeping the EPA-approved 125-hp Cleanfire 600?

This would be a one up on the new Ski-Doo Sport and keep customers happy in the power department without cutting into Indy 650 sales.

Polaris could even take it a step further and create an EFI version of the 600 SP with less sophisticated mapping running CVTech clutches and a mechanical oil pump, keeping the power under 90-hp to make the GOV happy and the price lower.

No matter what the outcome is, Polaris has enough excellent parts in the bin to build a stunning competitor to the new Sport. Call us next year to see what happens!