IS rMOTION GOOD TO A FAULT? 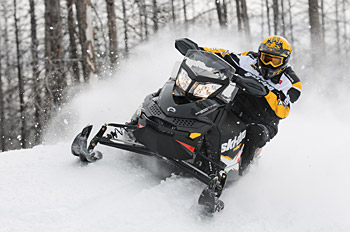 It wasn’t long after we rode the new rMotion skid in Ski-Doo’s 2012 MX-Z line-up we discovered the new rear suspension is so good, we could actually “over-drive” the XP’s current double A-arm front end.

The MX-Z XRS models with super trick KYB Kashima coated, base valve equipped dampers were the only exception.

This phenomenon cropped up way back in the early 90’s when FAST introduced the first M-10 aftermarket skids.

In most applications, sleds equipped with M-10’s could over-drive the ability of production front ends available at the time.

While not as profound in the XP, we were able to confuse the front end in deep rhythm whoop sections at the insane speeds the rMotion allowed the XP to achieve.

We think the answer will come in 2013 in the form of a new variable castor, A-arm IFS.