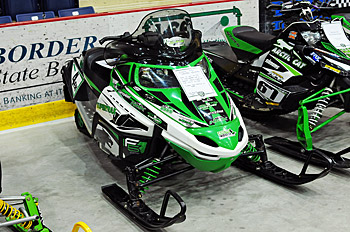 During the 2008 snowmobile season, Supertrax International ran a feature story about a 3-man team from Supertrax that was invited by Arctic Cat to run the USCC Red Lake I-500 cross-country endurance race aboard brand new Arctic Cat F5’s.

The team consisted of now SnowTrax Television Co-Hosts Luke and AJ Lester and a good friend of Supertrax – Jordan Elliott.

The race carried over a 3-day period and the plan was to have each lad race one full day with AJ taking the first, then Jordan, followed by Luke. Although each was a seasoned snowcross racer in the Canadian Snowcross Racing Association, this would mark their first cross-country event.

Day one got off to a blazing start with AJ way out in front, but with only 10 miles to go to the day one checkpoint, AJ hit a rock solid drift at about 80 miles-per-hour that sent him flying and the sled tumbling over and over and over again until it finally rested in a mangled heap.

AJ recalls, “Running close behind was a semi-pro racer who stopped and asked if I was okay. He told me my get-off was the gnarliest crash he had ever seen.”

AJ walked away from the crash and with the help of the Arctic Cat engineers in his pit, along with Cat’s Joey Halstrom, the guys pieced the sled back together well enough to finish all three days of the race.

This past summer at Arctic Cat’s 50th Anniversary celebration in Thief River Falls, as we strolled through the local arena admiring the vintage displays, we came across AJ’s sled from this very race.

It was either a replica or someone had recovered the wreckage and done a complete restoration of it. Everything looked out-of-the-box new right down to the 4-Eh number plate decals. Resting on the seat was a laminated copy of the article from Supertrax Magazine.

Its humbling to us that this article meant enough to someone to take the time not only restore this sled, but include it as part of Arctic Cat’s rich history on display at the event.

We’ll be re-posting this article in its entirety on this website soon along with the full color images from the race.

Staff Report
Previous articleIS rMOTION GOOD TO A FAULT?
Next articleYamaha Canada Transfers All Shares To US