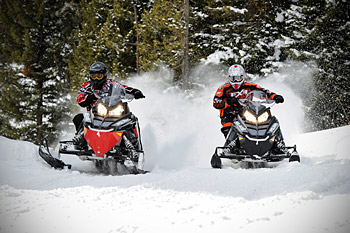 One of the most exciting industry developments this year is the rebirth of the iconic Indy nameplate.

In fact, a whole generation of snowmobilers has missed the fascination of the legendary Indy and unless an old one is sitting in a garage and still being used, those more recent buyers just won’t fully understand how important and influential those sleds were over a decade ago.

The truth is, a whole series of trailing arm IFS sleds from Ski-Doo and Yamaha broke out because the Indy was such a dominant sales force throughout the Eighties and Nineties.

The idea was: If you can’t beat ’em, join ’em and build your own version of the Indy. It wasn’t until the mold was broken by the REV all the rules changed.

This year, Polaris is taking back its own turf and, with the intro of the new Indy, has attempted to get back a lot of the hype and flavor of the original sled.

The lightweight, simplified, bonded bulkhead and fully evolved chassis technology is light years better than the old riveted setup or even the more recent IQ.

Where the old sensations start to come through, however, is in the riding. This sled is so reminiscent of the original it makes our eyes water with nostalgia.

This sled is the logical evolution of a sled that dominated our industry for a long time. It’s better in every way but hasn’t lost the original Indy tang.