HOW IMPORTANT IS WEIGHT? 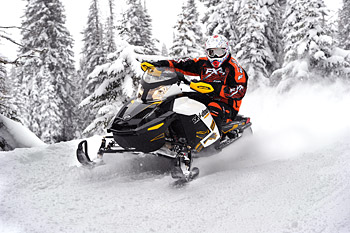 After getting some seat time on the 2013 sleds it’s becoming increasingly obvious that some sleds are lighter than others and some aren’t affected negatively if they aren’t.

One of the Supertrax crew made a comment a week or so ago that it really doesn’t matter if a sled is a bit heavier, as long as you can’t feel the extra weight.

Although this sounds like a contradiction, the truth is some sleds might be giving up as much as twenty or thirty pounds but when you’re riding them they handle and ride as well or better than the competing model with less mass.

Likewise, acceleration and top speed may not even factor in because the sleds are completely comparable when it comes to engine performance.

Certainly, by targeting the absolute lightest weight in a given class, the manufacturer is guaranteed to catch the eye of potential buyers because weight is still a top-of-mind consideration with the largest number of sled buyers.

However, a sled that has its weight positioned properly, its center of gravity low enough and the right calibration may actually feel lighter when you’re riding it.

Sometimes the extra weight is a good thing. Frequently, it’s used to reinforce the weak areas of a sled or adds to the durability of a sled both when ridden or when it may make unfortunate contact with an immoveable object.

We’re not saying a sled carrying an extra 80 to 100 lbs. is going to handle like a featherweight. What we’re saying is until you actually ride a sled you shouldn’t be scared off because one model weighs a bit more than another.

There’s more to it than you’ll find on a set of scales.