HOW IMPORTANT IS HORSEPOWER? 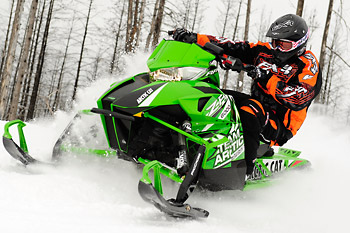 We’ve read emails and letters from our readers and viewers dissing certain sleds because their horsepower is lower than some competitive models.

It makes for interesting listening but we’re not sure horsepower alone is the defining factor making one snowmobile faster than the other.

Certainly, there are other important factors at play. Power-to-weight is a biggy. Provided drivelines are close to equally efficient, a heavier sled has to make more HP to beat a lighter sled with less ponies.

This is the case with say, the Turbo 9000 Cat and the 2-stroke 8000 Series. In a drag race, these sleds are mighty close and although the claimed power of both is about 15-17 horsepower apart, their weights are significantly different.

Here’s where it gets interesting. If you look at government EPA reports on snowmobile horsepower, by that rating system, every 2-stroke makes considerably less horsepower than the manufacturers claim. Meanwhile, the 4-stroke sleds tested report very close results to OEM claims.

Is someone lying? No. What is taken into account with the EPA system is a melding of torque and horsepower together.

Since 4-strokes make a ton of torque and 2-strokes tend to need RPM to generate big torque numbers, the duty cycle in which the EPA tests the sleds is different than what a performance shop would net on their in-house dynamometer.

Here’s our point: There are a number of factors that dictate what makes a sled go fast. Just because an 800 Indy makes less power (155) than a Ski-Doo 800 E-TEC (162) doesn’t necessarily mean one is going to beat the other on a trip down the lake.

Kent Lester
Kent Lester is Co-Publisher of SUPERTRAX Magazine and a regular contributor to this website.
Previous articleWHAT KIND OF LYNX COULD COME TO NORTH AMERICA?
Next articlePolaris Announces Buyback of Fuji Shares