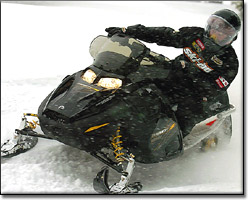 Last year Ski-Doo produced the 170-plus horsepower SDI 1000 twin with decompression bleed down holes in each cylinder to allow for easier rope starting. The term “easier” is a little ambiguous given the force required to tug this fighter over.

This year BRP has plugged the decompression holes and added another five ponies to the mill’s formidable tally. This would make the SDI 1000 the undisputed HP King of the sport coming oh-so-close to 180 HP!

There’s a common sense advantage here as well as decompression holes can increase plug fouling during extended idling. Besides, who in their right mind would order an M-Z or MX-Z 1000 without electric start?

Supertrax Onlinehttps://www.supertraxmag.com
Check back frequently for new content and follow us on social media!
Previous articleStanding Strong
Next articleFreestyle Racing