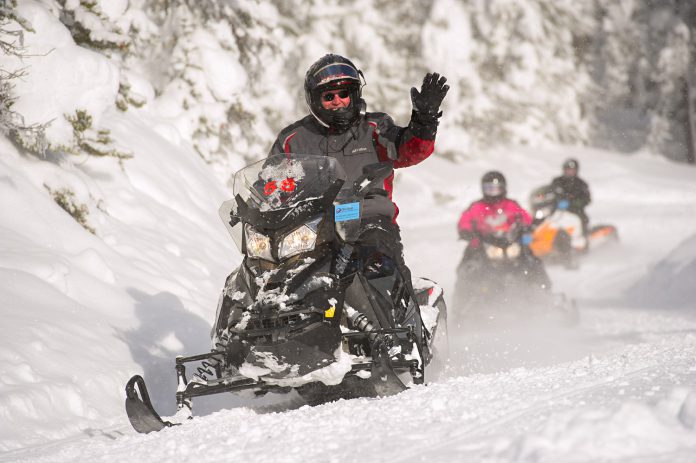 Though we don’t do it for the kudos, it sure is nice to get a letter like this from someone thankful for the help…

My wife and I, along with a few others decided to check snowmobiling in West Yellowstone off our bucket list this February riding the first two days in the park and then three days outside the park.

We picked up our rental sleds in the morning to go outside the park and had ridden on and off trail for about an hour when I went up on a bank and ended up going over. I went down about 5 feet and had no place to go and was stuck in the deepest snow I have ever seen.

Our group tromped through the snow to survey the situation and we decided that the only way out was to turn the sled around and go back out the same way I came in. One of the guys stepped between the skis and he sunk in so far that his eyes were level with the front bumper and his arms were across the skis and he still wasn’t touching the ground! We grabbed his arms and he kicked like he was swimming to get out.

I’ll mention now we are flatlanders from mid-state New York and not used to 6000+ altitudes. We would move the sled a few inches, huff and puff, then rest a few minutes. It was about an hour and we had the sled turned around, we started the sled, pulled on the skis and went about 2 feet then got stuck again.

As we are resting, a park ranger and a group of snowmobiles stopped to help. I noticed that the group had on some really nice new looking gear, one had a bright red suit, another a bright yellow suit but didn’t think much more about it.

We were really glad for the help. Without saying anything, they climbed down over the bank and started to help get the sled out. The park ranger got on the sled with the other guys around it and it looked like they just picked the sled up and tossed it onto the trail. By the time I climbed back onto the trail, the park ranger was on his sled and away he went with a quick wave.

I finally made it to my sled and my wife walks over and says, “Do you know who those guys were?” I didn’t but I was glad they came along. She excitedly says they are from Supertrax Magazine and they are the test riders on the 2019 new sleds doing a photo shoot that will be in the magazine! It now makes sense; the gear and the sleds!

I’ll say a huge thank you to the park ranger and the guys from Supertrax. You did much more than test new sleds that day.

My story continues from there.

We watched them ride off trail for a while and then we continued down the trail. There was one sled and rider waiting on the the trail spotting for the group and I stopped to asked what magazine they were from and he told me Supertrax.

We went on down the trail and played in some meadows and small hills. Of course two of our guys got stuck but not too bad. In the meantime, along come the Supertrax guys and they shred the meadow and small hills like nothing. It was fun to watch.

Again we go on down the trail and play here and there. Next thing we see is the mountain sleds on some really big hills doing their thing. Again we stop and watch for a while.
We continue on our ride and do not see them again.

Later at the hotel, a couple of our guys went to the hot tub and the guys that were in the hot tub were saying how they had to help a guy get unstuck that morning. I was glad they didn’t say jerk or some other obscene name. They tell them it was me and we realize we’re staying at the same hotel as the SnowTrax team and that evening we end up at the same restaurant.

We meet again numerous times throughout the rest of the week and it is time to head home. Walking through the airport we bump into the SnowTrax team getting on the same plane and at our stopover, while looking at the menu at a restaurant in the airport the SnowTrax team comes into the same restaurant. Everyone waves and says hi again. From here we part ways as they are headed to Toronto and we are headed to Elmira NY.

I mention all of this because your crew was very polite, respectful and considerate of everyone else. It was a welcome sight. The last few times we’ve snowmobiled overnight, we’ve dealt with groups of drunk, loud, guys partying all night and being very inconsiderate of other people around them. Pass it forward.

Oe more thought. Our second day outside the park we came across three guys and one of them missed a corner and was out in the snow with the skis straddling a tree. They’d been struggling for quite a while trying to get it out. The four of us and two other guys that came along were able to move the sled back and get it back up onto the trail. In 50-plus years of riding I would never ever drive by a sled that’s broken down or stuck without stopping to ask if they need help.

Thanks again to the Supertrax guys for helping us out.