FOR THE TOP SPEED RECORD 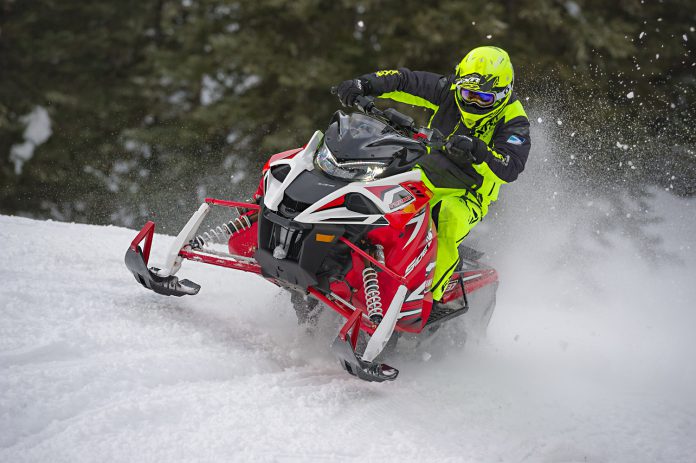 Seems I may need to clarify a couple comments I made on this site and in this season’s SUPERTRAX International Magazines.

One thing we try to be careful about around here is outright absolute proclamations of superior top speed. It’s not that we don’t make those proclamations – we definitely do. However we try to ensure we’ve got some boilerplate, firsthand data derived from early testing here at SUPERTRAX World HQ to back up our assertions.

This season we had early, and abundant snow thanks to Lake Huron, Georgian Bay and a strong and steady flow of northwest winds. Those two bodies of water stayed mostly open well into January so as a result where we are located – in the lea of Huron and Georgian Bay – pretty much gets regular and copious quantities of the white stuff whenever the wind blows.

This lake effect snow covers the central portion of the Province of Ontario and actually blows right into Quebec. It means many areas may not be seeing much snow as a result of a dearth of storm systems racing across North America. While we don’t rely on those systems – in the same way Michigan’s Upper Peninsula gets lake effect – so does Ontario.

My purpose here is not a lesson in meteorology. However some background is necessary to make my clarification – the subject of this article. Due to of magazine lead times, the pressure is always on for us to include our initial impressions of the most profiled new sleds every winter.

The internet’s immediacy has helped us with this however we still have tens of thousands of you who want our opinions and conclusions to be recorded in Supertrax – in time to reach you before the end of the season. This requires early season riding and comparison – something we love to do.

This season we were riding daily in early December – in amazing snow by the middle of the month – by Christmas it just kept piling up and up. We needed to be able to hone a few lakes on hard-pack to get some sense of what sleds were the ones to beat at WOT.

Inasmuch as we were on the lakes early here’s where it got tricky. There was so much snow falling – literally daily at World HQ – that we could not get a firm read on what sleds – specifically the new Turbo’s from Yamaha and Arctic Cat and the new 850 Ski-Doo – were fastest past the C-Note.

Try as we might it wasn’t until mid winter where the conditions where right and when the Yamaha and AC turbos staked their claim by being able to confidently wind them out and eclipse 125mph (200 km/h) on hard pack.

So my comments about not declaring an outright Lake Champion earlier created some angst – particularly with the Yamaha faithful. Here’s what we now know. The Sidewinder (and the AC 9000) are most often the fastest sleds down the lake and past the C-Note.

Their claimed 180 HP (cough) output which actually feels a little understated at that number – trumpsSki-Doo’s 165 HP and rolls the ‘Winder to near heroic top end digits. It would appear that on most days the fastest sled down Kevlar Lake in 2016/17 is the Yama-turbo.

BTW, we really appreciated the few who made it clear we are being paid by Ski-Doo to not give the fastest title to Yamaha. As much as we love juicy conspiracy theories we were actually making sure the unquantified-at-sea-level-sled, which on paper sounded like it would be the fastest down the lake in MY 2017, was precisely that.