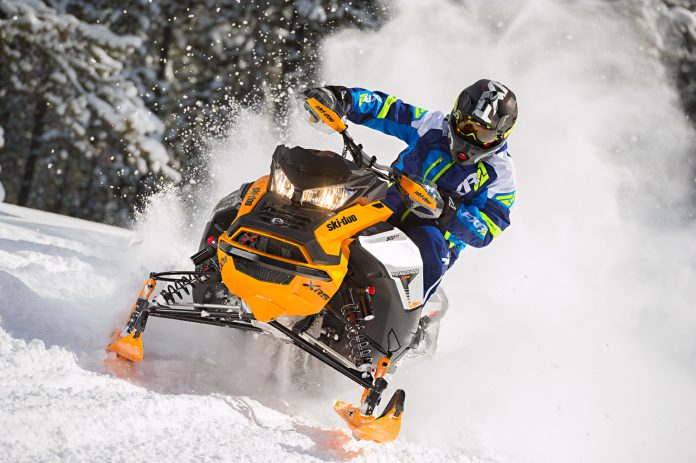 There were a lot of shocked gasps when it was revealed Ski-Doo was replacing many models for MY 19 originally powered by the much-beloved 4-TEC 1170 4-stroke with an all-new ACE 900 Turbo in the 137-inch Renegade chassis for MY2019.

The first shock was Ski-Doo’s move away from an engine (the 4-TEC) that has placed the company squarely in the lead in the 4-stroke realm.

This venerable big-incher has proven to be fast, fuel efficient and dead reliable. It truly established Ski-Doo as a viable leader in the 4-stroke engine class and those who have owned them have been more than satisfied with them. It is still available in a few 2019 models – but only a few.

The second shock is what Ski-Doo has chosen as a replacement. The 900 ACE engine has had its bottom end, rods and pistons beefed up and now accommodates a Rotax-built and developed turbocharger.

Where the former 4-TEC made about 130-hp, this new one claims 150. The new turbo-engine, with all its plumbing displays little – if any – weight disparity with the big-block 4-TEC.

Our test riders had ample opportunity to ride the new G4-based sled in Montana and were impressed with its handling and solid performance.

Get this straight: This engine claims 150 ponies, not 180 like Yamaha and Cat’s turbos. Thirty stallions is a lot to give up but, to a man, everyone felt this engine is an overachiever and delivered performance (at least at elevation) particularly at lower RPM – relatively close to the Yamaha turbo.

Although the dyno will undoubtedly show a big difference, the end result, acceleration up to about 80-mph, is competitive.

We think much of this is due to the Ski-Doo’s pDrive clutch and the fact the Doo offers a 1.6-inch track. We’ve said it before and we’ll say it again, the high torque output of a turbocharged 4-stroke requires traction. Cat and Yamaha have figured this out and offer up to 1.6 inch lugs.