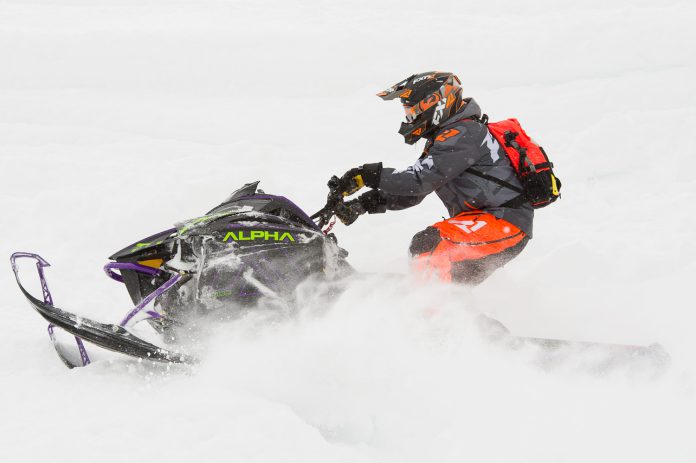 It seems like Arctic Cat has always been playing catch-up in the mountain marketplace and has stood firmly planted in the shadow of Polaris and Ski-Doo. This trend could be shifting quickly.

Arctic Cat mountain team leader, Andy Beavis, and his engineering group have been burning the midnight oil to meet and exceed those competitors and have given mountaineers something truly different that works.

Some of the issues the team has addressed are 1. Weight 2. Panelling-out on side-hills 3. Ease of Side-hilling and 4. Crisp, immediate throttle tip-in.

Cat successfully dealt with throttle response last year when it brought out its new DSI 800. This slot-injected 155-hp twin is exactly what the vert crowd needed and delivers the kind of braap-braap throttle response you require when you’re performing powder maneuvers. That alone makes a huge difference.

Cat’s recent mountain bodywork is actually inches narrower than previous designs and allows the rider to weight the sled and run sidehills so the lower bodywork prevents the uphill ski coming unattached from the snow.

Good uphill ski bite is the key to sticking on sidehills as you’re standing on the inside running board. Also, those boards are about an inch narrower and sculpted so the riders feet are more forward for better balance.

All of these changes, combined with lighter, skinnier spindles up front allow less drag and better agility in deep powder.

Without a doubt he biggest change this year is a new mountain specific skidframe design called “Alpha One”. This is where things get super-interesting: Basically Cat took all the old deep snow skidframes and track design concepts and threw them out the window.