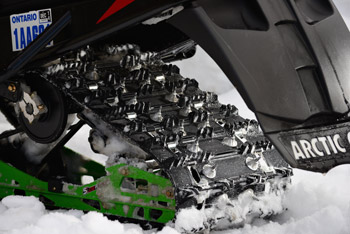 It’s not often we come across an aftermarket product that lives up to its promise of not only reinventing the wheel, but actually making it spin better.

When we first laid eyes on these all-new stud retainers from Performance Stud Stars we were tempted to discount them as “track bling”. Wrong! It didn’t take more than one day on the trail to realize these precision-machined backers with a star-like appearance are more than just eye candy.

The lightweight, durability and performance characteristics of the backers make them a worthy upgrade for anyone who studs their track, despite their higher cost.

Performance Stud Stars are an all-in-one (nut & washer) stud retainer, precision machined from aircraft grade billet aluminum. The intended purpose behind the design is to extend stud life by eliminating the critical flex point, which often results in bent stud tips, and can ultimately lead to stud tear-out.

The first thing you’ll notice when you pick up the Stud Star is its light weight. We installed 0.68″ tall x 1.37″ wide backers on our Arctic Cat 6000 El Tigre. Compared to the stock nut and washer, which weighed 16 grams the Stud Star backer was only 10 grams.

With 135 studs in the track this equates to a 1.75 lb weight saving that’s amplified exponentially when your track is spinning at 100 per. The result? Less rotating mass and better acceleration.

Using the installation wrench, which is sold separately, and the help of a buddy we were able to swap-out the old stock backers in a little over an hour, leaving us plenty of time to hit the trails and test them out. The plan was to nail as many road crossings as possible to validate the Stud Stars durability claims while testing braking and acceleration on hard pack.

After a day of hard riding – grinding 30 road crossings – and railing a mix of iced up corners and loose granular snow we came away impressed.

When we changed out the Stud Stars we purposely left some of the old nut and washer backers in place as a test to see if there was any difference in durability. Sure enough, the Stud Stars lived up to there claim of vastly improved support for the stud stem. Proof positive was two of the original studs and backers returned mortally wounded – one severely bent and the other completely torn off.

As for a tangible performance improvement, it’s hard not to notice the benefits of Stud Star backers. Their conical shape with CNC machined-in grooves provided more bite under braking and a noticeable improvement under acceleration – even in loose granular snow where studs usually have less impact.

We attributed the acceleration increase in granular snow to the increased surface area of the Stud Stars which act like miniature track lugs scooping more snow, propelling the sled forward.

So far the Stud Stars have lived up to their claims. We’re anxious to see results from our season long testing so stay tuned – next season we’ll have a full-report on the Stud Stars ability to withstand our unrepentant abuse.