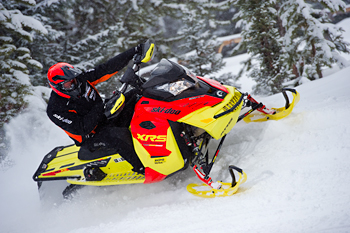 It’s pretty hard not to get noticed riding the limited build MY15 Renegade XRS sent to us a couple days after we arrived home from Snow Shoot in West Yellowstone.

Honestly, the coloration is close to something Ronald McDonald would paint his car.

However, in the realm of snowmobiles we think the bold, bright and brilliant yellow/orange scheme is awesome.

Interestingly, immediately following the unveil of the Renny XRS at BRP’s annual Club Ski-Doo in Quebec City, the company announced there’d be a solid black version. So everyone calm down, take a deep breath and relax.

The color is inconsequential as far as I’m concerned – I’m confirmed color blind and frankly, I don’t really care what color Ski-Doo paints its 2015 models with the new and vastly improved RAS II IFS.

The new A-Arms, and spindles have finally erased our biggest and most persistent complaints with the XP/XR/XS chassis – nervous on-center feel, dart-prone edgy-ness at speed and hunting in deep whoops. That stuff is virtually gone, erased and no longer an issue with handling on these platforms.

We know Ski-Doo-nuts will be crafting hate mail saying they’ve never experienced these maladies and we’re “nuts”. The line begins behind the guys who say there’s no throttle lag on the 4-TEC 1200.

XP/XS and XR sleds since 2008 display a nervous on-center feel that increases with speed. One-handing these sleds above trail speed was nearly impossible as this nervousness transferred into too-strong initial turn-in when navigating twisties. The sled wanted to turn – right now – with just an incremental bar movement.

The raising of the chassis’ roll center so its closer to the sled’s CG has made the RAS II configuration far less edgy on-center – up to and including 20 degrees of handle bar rotation.

The sled demonstrates subtle, but welcome initial body roll, transferring weight to the outside carbide. This is similar to the way a Pro Ride Polaris or a Pro-Cross Arctic Cat turns-in.

The uber-flat cornering posture of the original XP/XS/XR geometry has been reduced – replaced by subtle, confidence inspiring roll.

More importantly, the chassis now clearly communicates when inside ski-lift will begin. The old set-up stayed laser level until the inside ski “popped” unannounced.

Bottom line? RAS II is much more rider friendly. The good news is this – you can run faster in the trees with less effort and more confidence than previous XP/XR/XS models. Winning!