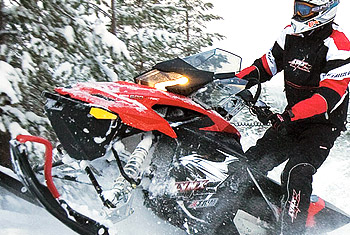 We know, we know. This kind of speculation has been running around for the last ten years. However, there’s finally some evidence it may actually take place.

What makes this load of recent data particularly believable is that the fifth company already exists and has been doing business in Europe for decades. We’re talking about Lynx, a subsidiary of BRP, manufacturers of Ski-Doo snowmobiles.

The company has recently expanded and modernized its factory capabilities and is ravenous to get into new markets.

What makes the rumor so plausible is the fact that all of Ski-Doo’s E-TEC, 4-TEC and ACE super-clean engine technology is already in assembly in the company’s Rovaniemi, Finland manufacturing facility and being dropped into a full selection of 2011 Lynx snowmobiles that look a lot like the lightest-in-the-biz XP, XR and XU versions of the Ski-Doo.

The sleds look very similar to Ski-Doo models but have suspension differences and some subtle features and model segments not offered this side of the ocean.

You’ll get more gritty details in the upcoming issue of Supertrax but we think this could actually happen within the next two years.