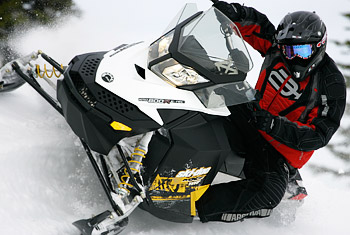 There’s tremendous hype this year about Ski-Doo’s new 800 E-TEC and the redone 800 SDI from Polaris. We;ve sampled both and all we can say is these are two very fast, very competitive hyper engines. Fact is, Cat;s current 800 is pretty darn good, too.

It would appear everything is rosy on the big-inch front right now. However, is there something on the horizon no one anticipated? With the current flat economy and the cost of fuel being high, many former hyper owners we’ve talked to are telling us they’re so happy with their 600 class snowmobiles, they don’t see the necessity to move up to a bigger displacement mill.

It’s true, too. The current performance levels of 600 engines like Ski-doo’s E-TEC and the Cleanfire Polaris 600 are so strong that, when combined with the lightness of their new chassis platforms, the power-to-weight ratios of these models is incredibly good and perhaps is at the acme of what the class has ever delivered.

All of those old Formula and Indy 600 sleds of a bygone era made about 100 ponies and were considered the muscle sleds of their day. 120-horsepower is the standard of today’s sleds in this displacement range and there’s plenty of power and torque to keep even the most aggressive rider entertained.

Despite the fact the early season sales of 800 sleds has been extremely robust this year, there seems to be an equal amount of interest in the 600-class and it’s taken the industry by surprise.