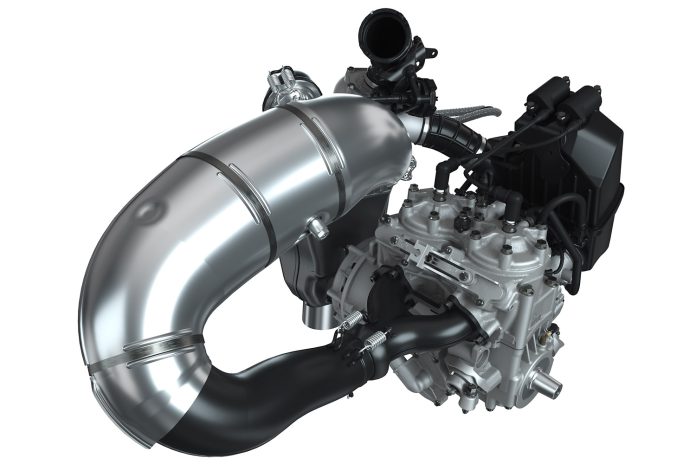 So, Polaris has a turbocharged, factory built and factory warranted 850 twin, which was launched last winter for 2021 Snow Check buyers only. RMK models ordered with the new Patriot Boost 850 sold out in a matter of hours.

Ski-Doo experienced this exact reaction a year ago when it introduced the Summit with Rotax 2-stroke Turbo power. To say the mountain market wants turbo-2-strokes or maybe more accurately, more power would be an understatement of Olympic proportions.

So where am I going with this discussion? I’m going where you’re going. The inevitable question not even 30 seconds after the sheets were pulled off these two innovative sleds was: When will there be a turbocharged 2-stroke trail sled?

Let’s try to bring some perspective to this burning question. Does it make any sense for these two OEMs to offer trail sleds with 2-stroke turbocharged engines? Right out of the gate I suspect there’s a pretty hard ceiling on the number of turbos Polaris can build. EPA emission certifications are not some willie nillie procedure an OEM can side-step – not without penalty.

That being said the “penalties” for messing up the model mix of snowmobile (engines) an OEM offers can be reconciled by using clean snowmobile engine “credits” (if they have any).

In other words, a sled-maker that sells a disproportionate number of clean engines can bank certification credits to carry along models that do not EPA certify or are at the threshold of certification cleanliness. If you get where I’m going, it might be possible to use EPA credits to offer less-clean 2-stroke turbos. However that only applies if you don’t exceed your “available credits”.

This whole system is cumbersome, hard to explain and hard to understand. In simple terms, we doubt Polaris would be able to build enough trail targeted, certified trail Turbos to make such an effort profitable.

Lets say I’m wrong about all of this and there are no EPA restrictions holding back Polaris from building as many turbo 850 Indys as the market (that’s you) wants. Would Polaris do that? My suspicion is they would not.

In the not too distant future, Polaris is going to pull the sheets off a 4-stroke engine package that will satisfy buyers of sleds producing multiple levels of performance. Do I know this for sure? No. However, I‘d bet the farm on it happening.

I’d also put money on Polaris including a turbocharged version of this 4-stroke engine package. It has not gone unnoticed Ski-Doo is making hay with its turbocharged ACE 900 (4-stroke) in two power variants. Also, both Yamaha and Arctic Cat have 180 (plus) horsepower 4-strokes for the trail.

If Ski-Doo doesn’t do a turbo-trail 850 2-stroke then we would not anticipate Polaris taking its Liberty 850 Boost to the trails. Ski-Doo gets 180 ponies (or thereabout) out of the ACE Turbo R triple. Fact: they can’t build enough of these engines. It would make way more sense for Polaris to continue its predicted development of a versatile 4-stroke triple cylinder power pack with the potential to be turbocharged up to 180 (or more) HP.

One thing’s for sure – there’s a lot of money being invested in snowmobile internal combustion engines at this point in history. Next time, we’ll talk about electric powered snowmobiles. Seriously.

Mark Lester
Mark Lester is Co-Publisher of SUPERTRAX Magazine and a regular Host on SNOWTRAX TV.
Previous articleWill We See A MATRYX Featuring DYNAMIX?
Next articleGlobalstar Canada and CCSO Urge Riders to Get Gear Ready Earlier this Season