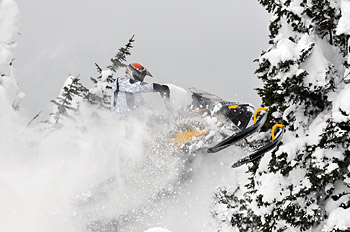 It looks like winter has arrived with a fury!

We’ve been checking the weather and have created a brief summary to get snowmobilers salivating and, more importantly, out there on the snow for the holiday season.

Get your sled dusted off and ready to ride. Make sure you’ve got your proper trail paperwork completed in your area because many regions are already grooming! It looks like last year’s snow drought is a distant memory – Yippeee!!

Wisconsin is getting hammered with the white stuff while this is being reported. Not just a little of the stuff either – this one will be measured in feet not inches! This is a major snowfall and it’s not letting up for a while. The system reaches right down into Iowa.

This area got hit with record snow early and some parts of the province report 80-percent of their trails are open already to date. This means they’ve been grooming and snow depth is more than 2-feet.

The Upper Peninsula is getting plenty of snow and the rest of the state right up to Sault Ste Marie is benefiting from the big weather system sweeping Wisconsin.

Snow depth of about a foot is reported in the North Bay area and Parry Sound District has decent snow cover. Haven’t heard if grooming has started here but the reports are for plenty more of the white stuff between Christmas and New Years.

Good things coming and after being left out of winter last year, the Great Lakes weather systems are finally cooperating. There’s aslready decent snow cover in the middle of the state right down through the northern Pennsylvania area.

Twin Cities got early snow and then some melting but the weather has been cold and conducive to creating a good snow base. More snow happening right now across most of the state and the upper part of Minnesota right into Manitoba is white.

Check out these links for big weather news: