DOES POLARIS HAVE A 4-STROKE PROGRAM? 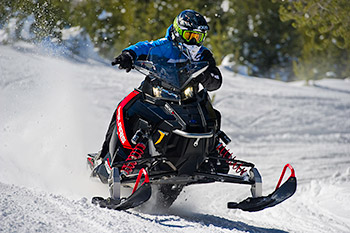 It’s hard to believe a company that builds 4-stroke engines in its own US-based facility for massive numbers of ATVs and SxS vehicles, doesn’t have 4-stroke lined up for its snowmobile division.

Here’s the evidence so far: First, Polaris owns title to one of the best 4-strokes ever offered in an off-road vehicle. The US-built XP 1000 parallel twin designed and built by Polaris is a very stout mill producing 110-hp without a turbocharger or a blower.

This DOHC engine is snowmobile ready. Its castings are not built for a motorcycle engine equipped with a gearbox but rather it has a snowmobile-friendly case design that already uses a CVT.

There’s also another version of that mill: The same engine is available and in use in thousands of SxSs as a slightly tamer 900cc version producing 75-horsepower.

Both these engines are thoroughly consumer tested and have a strong reputation for reliability and incredible performance.

Point 2: It’s hard to believe when Polaris designed the Pro-ride chassis, versions of which cross over into the first RUSH-series, the Indy and even the AXYS, the engineering department didn’t look very seriously at providing 4-stroke adaptability to that design.

True, Polaris was not enamored with 4-stroke snowmobiles at that point, given the slow sales of its IQ with a turbocharged Weber 750 underhood, but it’s a stretch to believe the corporate gurus were completely ignoring the 4-stroke segment’s potential in the future.

So, the question is this: Will a ProStar 1000 fit into the engine bay of any of the snowmobile platforms Polaris builds in 2015?

We believe it will – perhaps not without some modifications – but we think there’s room and potential for the relatively narrow twin to be adapted to any of the current Polaris platforms.

Ideally, we think the Indy is the most logical chassis to offer a ProStar 4-stroke. It would mean the end of the IQ chassis used in certain 2-up and utility offerings and would provide the range of performance in either 900 or 1000cc iterations that would allow Polaris to compete with Ski-Doo’s 600 and 900 ACE offerings.

Maybe, with some cam and timing work, even compete closely with Yamaha and Cat’s engines based on the 1049cc triple.