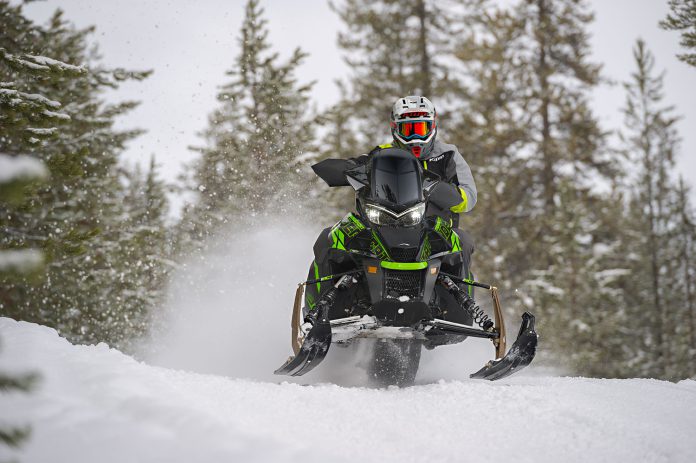 From the first day there were 4-strokes in the snowmobile business, naysayers have used the same argument: “They’re too heavy”!

It’s true, 4-strokes have had a distinct weight disadvantage compared to 2-strokes but there have been other endearing factors for snowmobilers, not the least of which is the incredible power output you can gain by turbocharging them. Until now everyone has pretty much believed it was a problem that would never be solved.

There’s been a recent technology breakthrough, however, that may go a long way to changing the rules when it comes to the 4-stroke weight argument.

Engineers in Britain and Europe have developed a new 4-stroke cylinder head that is lighter and more compact than what current overhead valve and overhead cam engines use. Look it up online under “Freevalve” or “CamCon”.

The technology is referred to as Intelligent Valve Actuation and it eliminates the need for a timing belt or chain and associated pulleys or gears.

The deck height of an IVA engine is considerably lower because there’s no longer need for valve lifters or valve springs and no longitudinal camshaft sits atop the cylinder head.

Also, because the above-mentioned drive gear for a cam is gone, the engine is shorter.

Instead of the above valve and drive paraphernalia, there’s an electronic module sitting where a conventional cylinder head would be. Inside, all the valve timing is digitally controlled (there are still valves controlled by individual tiny cams for each cylinder in the module) and each cylinder can control valve “moments” separately.

The result is better fuel efficiency, up to 30-percent lower emissions and – wait for it – more power and torque.

This would definitely put a 4-stroke much closer to a same-displacement 2-stroke weight-wise and maybe change a lot of thinking in the business.

The inventors are still working with details and testing but the prospects are extremely strong this tech will appear on automobiles in the near future. Oh, and BTW, IVA works really well with turbocharging.