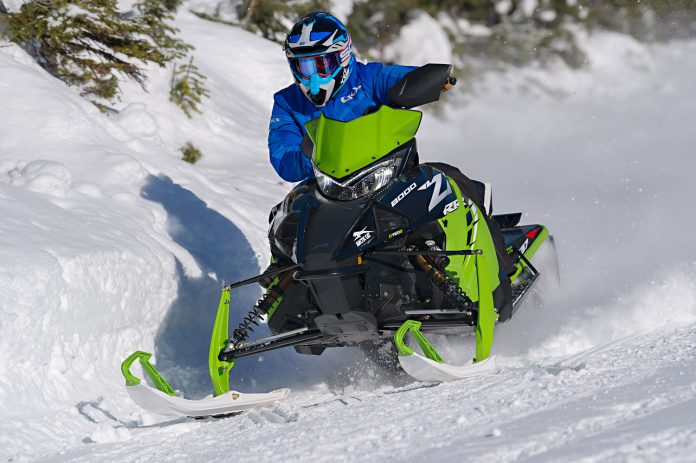 There is no doubt it’s Arctic Cat’s turn to level a new snowmobile platform.

In fact, Cat has exceeded the industry-established (by Ski-Doo and Polaris) five year chassis cycle by almost five years.

Yes, my green underwearing friends, it was MY 2012 when the current ProCross platform was introduced. Surprisingly, it remains strikingly familiar to this day.

We don’t ascribe to making changes simply to meet an arbitrary timeline. However, the current ProCross platform has been tweaked and touched up numerous times – and the net effect has been generally good.

But not all good. Two glaring areas are overdue for a re-think that in all likelihood, will require some significant component shuffling.

FIRST TO GET SHUFFLED

For sure the industry has come a long, long way since 2012 in terms of rear suspension compliance. The ProCross continues to use exactly the same skidframe – the “Slide Action” in 129 and 137-inch variants.

The Slide Action setup has never been widely known for plushness, however, it is an effective ditch banging set-up that’s rock solid reliable and genuinely bulletproof.

Unfortunately, there’s the stark reality of how good the other guys, namely Ski-Doo and Polaris, rear suspension systems are in MY 21. Here’s our thinking on the issue:

Why not develop a new rear suspension based on the same foundational designs as rMotion and Polaris Pro CC? These extra long front torque arm designs are clearly the future for trail sled suspension.

The bigger issue with this thinking is whether or not such a skidframe design could be shoehorned into the current ProCross architecture.

SECOND TO GET SHUFFLED

The next issue requiring attention is the seat. The current ProCross seat continues to be both too soft and too low, even after a re-jiggering of the seat more than five years ago.

The question we have is whether or not the seat can be made firmer and taller while incorporating a flat top all at the same time.

This may require some chassis and component adjustments revolving around where the rider interfaces with the rear torque arm and drop-link mounting positions.

Clearly the complete re-do of ProCross bodywork two season ago netted more space for the rider to move around while providing vastly improved underhood service access.

The ProCross bulkhead, with its radically spaced upper and lower A-arms has served this chassis well. In particular, the wide spacing has allowed for the fitment of a very broad range of power packages including the most powerful production snowmobile engine in the biz, the Yamaha 998 Turbo.

Considering this chassis can swallow a tiny 65-hp, 400cc liquid cooled single in the BLAST and a bevy of potent 2 and 4-stroke engines is remarkable.

The most recent IFS tweak for MY 2020 that raised the lower balljoint location on the spindle has been among the most significantly tangible improvements in the chassis’s nine year history.

The ProCross now turns-in and holds its line through the center of turns with both predictability and absolute precision.

When it’s all said and done, the ProCross is undoubtedly the most versatile snowmobile platform in the industry. There is actually very little needing a re-think – however – we believe a new skidframe and ergonomic updating would keep the ProCross fresh for at least another couple years.