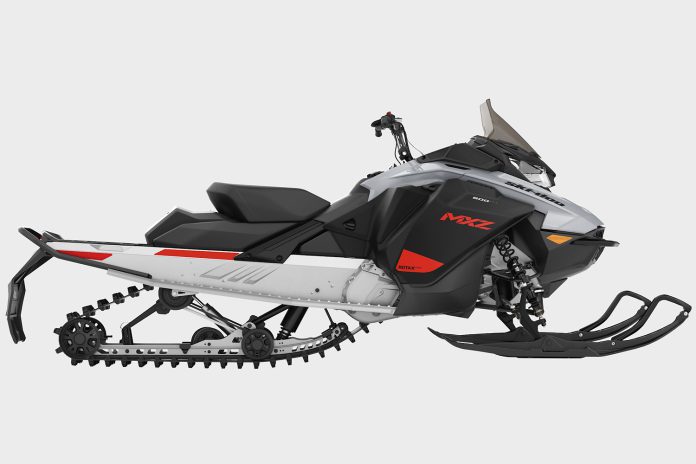 Whenever a new snowmobile concept is introduced, there’s always a lot of navel gazing about what the OEM should have done with it.

Ski-Doo’s new Sport is no exception. We’ve fielded comments from our readers and viewers about what Ski-Doo should have added to the Sport – or left off.

Naturally, those same commenters want the price either reduced or to remain the same with all the extras added in.

We’ve taken a part-by-part view on this new sled and when we add up all its features we can’t help but conclude it’s an exceptional deal! When we looked into it, it actually surprised us. Here’s why (in sections):

Yes, this new engine is a simple design. No exhaust valves, no E-TEC injectors, no complex DI computer mapping.

Instead, it offers throttle body electronic fuel injection on a detuned version of the 600R “block” with the 600R’s mounting and positioning in the center of the bulkhead.

We’re still digging for details on the EFI engine’s EPA compliance levels, but we suspect, if the engine does certify, it’s because of its relatively low 85-hp output and the restricted amount of fuel it is passing through its cylinders.

As it is, the engine uses throttle-body EFI and the air/fuel mix is scavenged through the crankcase. This is old technology, but it can be clean enough to certify with the use of an electronic oil pump system and pin-point oil injection (oil sprayed directly onto bearings separate from the gas mixture).

The point is, this 600 makes a claimed 85-hp and this is actually a bit better than one of the industry’s largest selling 600s did in the past – the carbureted Extra-Lite 600 triple in the Polaris XLT made somewhere between 80 and 85-hp.

Because Ski-Doo chose to use economies of scale to get to a low MSRP, they’ve used the new G4 chassis instead of the old XS platform. Buyers get RAS 3 front suspension but not the new “X” widened front end.

We originally fantasized about an upgrade to the old XP Sport using the XS platform and an upgrade to a new hood and maybe…a pDrive clutch.

We certainly underestimated Ski-Doo’s determination to bring a really good, fully equipped, value priced sled to the market this year.

Some readers are poo-pooing Ski-Doo for not including the rMotion skid with the new Sport.

Lets get into the memory banks for a sec and remember just how good the SC-series skidframes were before Ski-Doo blew everybody out of the water with rMotion. We honestly felt, back then, that the SC-5 was the best riding skid in the industry.

121 x 1.5-inches is pretty impressive for a sled making 85-ponies. Ski-Doo could have easily downgraded to a 1.0 and gotten away with it. Didn’t!

Whether you agree with the G4’s far-forward, engine-centered chassis layout or not, Ski-Doo bit off the biggest chunk it could possibly have done by offering its latest chassis tech with it’s lowest-priced-category sled.

The G4 platform means you’re getting the most advanced and efficient layout Ski-Doo makes and you’re paying far less than you would for the same tech in other categories. Bonus points.

We could get into more detail but feel we’ve covered the biggest reasons the Sport is a fabulous deal. At the prices Ski-Doo has set, we expect it to rock the snowmobile biz and bring a lot of new people into the fold. Impressive!