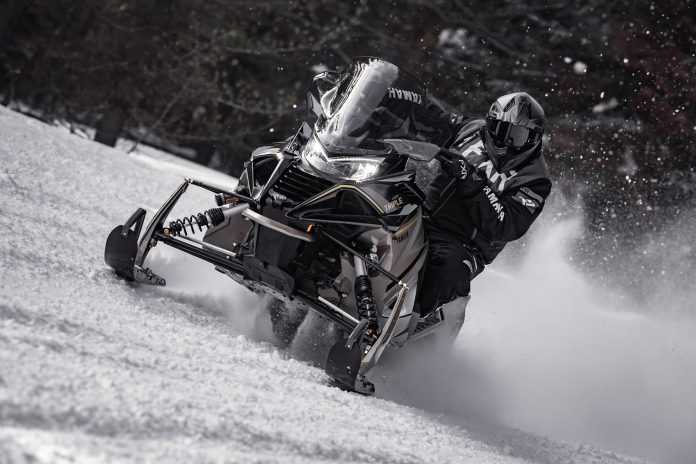 It’s been a long time since we’ve had a non-turbo Yamaha PR unit. Kinda makes sense because Yamaha makes a lot of turbo Sidewinder variants and not so many non-turbo sleds.

The Viper is interesting to us because it’s Yamaha’s full frontal assault on the meat-of-the-market 600 – 650cc 2-stroke class.

I better qualify that last statement: The 600-650 2-stroke class can also be identified as the 125-135 horsepower class except for the Polaris Matryx 650. It may be as high as 140 ponies. Anyway, you see where I’m going.

The 600-650 marketplace is huge, especially in flatland, trail based markets. Yamaha needs to be in this segment and the 130 HP 4-stroke, 1049cc triple used in the Viper is among the most proven and potent normally aspirated (EFI) engines in the biz.

The venerable 1049cc triple in this proven chassis is a superb combination of strong acceleration, confoundingly intuitive handling and impressive big end performance down the lake.

Why do I say the handling is confounding? There’s no hiding the reality the Viper is heaviest in the 600-650 class. That’s a 4-stroke engine, my friends, and it makes no excuses for this reality.

However, among all the Sidewinder turbocharged variants, this normally aspirated triple is the most fun to throw around on tight, twisty and wide-open trails.

So inevitably we’ll be comparing the Viper to 600-650cc 2-strokes around here and we think that’ll be fun and enlightening all at the same time.