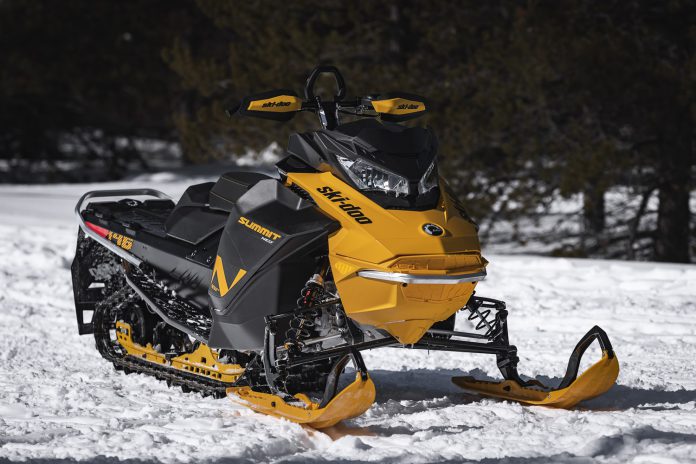 Recently, I was thinking about the intro of Ski-Doo’s NEO high-value snowmobile. At some point in my pondering a revelation hit me squarely between the eyes.

I have to admit the concept of and target market for the NEO is exceptionally similar to one of snowmobiling’s truly iconic models from over 45 years ago.

Stay with me here – this is an interesting bunny trail we’re about to walk (hop?) down. When the 1977 (limited build) Enticer 250 landed, it broke the mold of what a high value, low cost snowmobile could be at the end of the 1970s.

The Enticer’s fit and finish was unrivaled in the industry in 1978. I won’t get into detail on how the ET 250’s innovations compared to what was considered a “high-value” sled at the time. That’s a story for another day.

Consider this: The 1978 ET 250 had a US MSRP in the $999.00 range and a CDN MSRP of $1249.00. Even by the standards of the day, in the 70’s this was crazy low. Here’s what happened. The first two years of ET 250 sales were insane. After I got my first ride on a 250 Enticer, my brother Kent and I initiated a day long phone canvas of southwestern and central Ontario Yamaha dealers and finally found an unsold 1978 250. It was a four hour round trip to get the sled and the dealer told me he had other calls from serious buyers who were on their way. We jumped in the truck and ran WOT to get our ET 250. As it turned out we barely beat another buyer to the dealership for the last one in captivity.

That first ET 250 impressed every single person who rode it and I am sure it sold more Enticer 250’s that first winter. The next winter we acquired another ET 250 and two ET 340’s then an ET 300 and on it went throughout the Yamaha model line-up for more than 5 years.

The interesting part was how many of our friends bought new Yamahas during that 5-year span. The ET 250 was a huge success for Yamaha and propelled them into the early 80’s as the most innovative, highest quality OEM in the sled biz.

So, here’s where the story gets more interesting if you are too young to remember the Yamaha Enticer 250. The new Ski-Doo NEO (for this diatribe we’ll stick with the base NEO not the NEO +) is an amazing high value snowmobile with a ton of innovative features you would never see on a sled with an MSRP this low in MY 2023.

The NEO is not a three quarter sled. It is built on Ski-Doo’s Gen 4 platform with a 120 by 14 wide, one-inch lug track. It uses a built-for-NEO single shock skid with lots of travel and Ski-Doo’s proprietary RAS-X front IFS.

Underhood, there’s a Rotax cylinder-reed 600cc EFI 40-HP oil injected, E-start, 2-stroke twin with RER. The riding position is slightly narrower for smaller riders but still pure G-4 and the sled looks just like a Gen-4. The uninitiated could mistake it for a 600 E-TEC MX-Z.

The entire issue here and the point I am about to make revolves around the value these two sleds represent. The 40-HP NEO retails for $6,399 in the US and in Canada for $7,999. These are very low MSRP’s considering the features the NEO brings to the table. Way back in 1978 the ET 250 represented similar value. Nothing came close to the ET 250 for ultimate value 45 years ago.

The success of the ET 250 is rooted in more than just snowmobile sales. It was about new people and returning people picking up an ET 250 and getting (back) into snowmobiling. It was also about brand building. Today there are still snowmobilers who bleed Yamaha and have their roots in the Enticer series.

Ski-Doo deserves to do well and make hay on the NEO. This sled is bringing back riders and getting lots of attention from new riders. The demand for NEOs this model year has been like a tsunami. Simply put, if SD had built twice as many NEOs there likely wouldn’t be enough to go around.

So, there you have it. Turns out a story about two snowmobiles spanning more than 45 years has tremendous similarities. Let me know what you think.