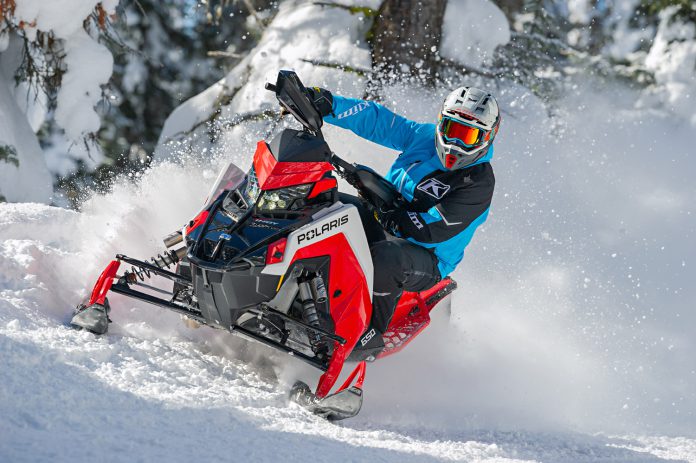 In case you hadn’t noticed, Polaris is in fighting trim these days, delivering segment shattering products demanding a response.

Here’s the deal. It’s no secret back in MY 2017 when Ski-Doo intro’d the G4 REV chassis with a class disrupting 850cc Rotax, the competition had a big decision to make.

The competition in this scenario was Polaris. Could Polaris have ignored the new 850 Rotax and just continued to market the potent Liberty 800 proclaiming it was capable of dealing with the new Ski-Doo 850?

We’ll never know the answer to this assertion but, so you’ll know we’re still on our game, we’ll hazard a guess. No, Polaris could not ignore the market leader’s bar-raising 850. Even if the shoe was on the other foot and Polaris had been first with an 850, Ski-Doo would have had to respond. The issue here is this: As the sales leader, can Ski-Doo afford to ignore the new Patriot 650?

WHISTLING IN THE DARK

Here’s the problem. The onus is doubly on Ski-Doo to step up with a 650 because Ski-Doo is the market leader! Acting like the Patriot 650 Polaris is not worthy of a response would literally be whistling in the dark. Leaders have to behave like leaders when thrust into a situation that leaves the leader’s gun a little less loaded.

Here’s another scenario worthy of our intelligent comments. What if the new Patriot 650 isn’t the real deal and doesn’t up-the-ante conclusively in the most popular engine segment in the market, the 600 class? Then, for sure, Ski-Doo (and Arctic) could afford to stand back and watch.

Unfortunately (or fortunately, depending on your brand affiliation) the new Patriot 650 is 100-percent triple-A beef. From initial engagement through the midrange the new mill pulls strong – we mean 800 strong and the top end leaves nothing for the competition’s 600’s to brag about – unless they want to brag about who came second. The new 650 Patriot is the real deal – a game changer in the same way the Rotax 850 was in 2017.

WHAT HAPPENS IF SKI-DOO DOESN’T RESPOND?

Pretty simple. Polaris will increase market share and that share will mostly come from Ski-Doo. We’ve said this before: Ski-Doo has the most brand switchers in their owner profiles. Brand switchers switch brands when the game changes – and it has. Six-fifty ccs is the new 600 class. No going back now.

WHAT ABOUT ARCTIC CAT?

Arctic Cat is the other 2-stroke competitor in the 600 class. Clearly, AC is due for a tune-up on its dual stage injection 600 twin. We’re not engineers and can’t comment on whether or not the current DSI 600 could become a 650 with an over-bore. However, if it can, Cat would be wise to get a 6-pack of line hones and carve out some bigger holes in the current DSI engine.

What goes around comes around, my sno-mo-demented friends. The times are changing. The new Polaris Patriot 650 engine not only delivers more torque and an immense kick in peak horsepower, it does it on significantly less fuel than the current Liberty 600.

We fully expect to hear voices from Valcourt saying they’ve tested the Polaris 650 Patriot at the first sign of snow this fall. Those voices will say the Rotax 600 can match the Patriot 650 in the all-new MATRYX chassis. An understandable response, under the circumstances. Unfortunately that posture will not work for long.

Frankly, we’re surprised Ski-Doo didn’t see this coming when it was tooling the new Rotax 600R. Snowtrax TV and Supertrax Magazine were predicting a 650 Polaris literal moments after the 850 Rotax was unveiled. But hey, what do we know?

We think chances are good Ski-Doo has a new 650 under development as you read this article.