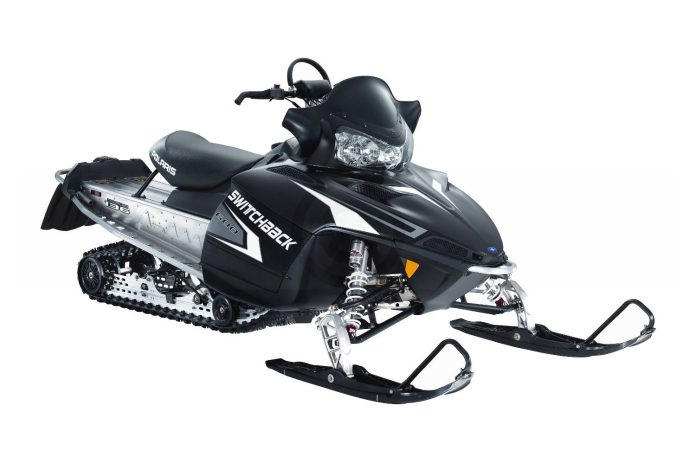 Yes, this is an old chassis – the IQ – but as a ten-year-old sled, it makes for a very reliable, readily available used ride – especially with a 600 under the hood.

We chose the Liberty 600 Semi-Direct injection twin here because it’s proven to be bug-free and has aged extremely well. Its 125-hp is more than adequate for both boondocking and trail use and its coupled skid with 14-inches of travel and Walker Evans adjustable gassers will still work well today. These shocks are rebuildable and can either be replaced or refurbed at a reasonable price, if necessary.

If you’ll recall, the IQ used an early version of Polaris’ trademark non-parallel double A-arm front end and although it didn’t handle quite as well as the lighter Pro-Ride front end (already introduced in 2010) or especially the later AXYS design, it was still a magnificent handling sled and a pleasure to ply on trails. By 2011 all the ills had been worked out of the IQ platform and this is among the last of the models using that chassis.

We’re focusing on the 136-incher here because Polaris had already replaced its shorter 121-inch tracked IQ trail sleds with Pro-Ride RUSH models by MY2011. Those, too, would be a good used sled investment but we strongly suggest you stick with the 600 Liberty in any Polaris from that age group.

It’s amazing to me how much maturation can take place in just 10 years! Kent has really come into the mainstream with his endorsement of this fine snowmobile. I too agree this was likely the best IQ based sled Polaris built and it does make a great platform for a stellar used sled purchase. I also agree the 600 Liberty engine – which is as tough as an anvil – is the correct choice when combing the web for a used SB 136.

In MY2011 Polaris’ legendary variable castor IFS delivered what it delivers today – the best handling in the biz. There are some interesting subtleties with the original IQ. One particularly desirable feature is the chassis’ use of a clam shell hood. Remember when you could swap a plug in like 30 seconds without grinding your hands up like you stuck them in a garbage disposal?

Inasmuch as the new 3-piece bodywork on both the AXYS and MATRYX are the easiest in the biz to remove and remount, underhood access cannot be compared to a good old clam shell IQ.