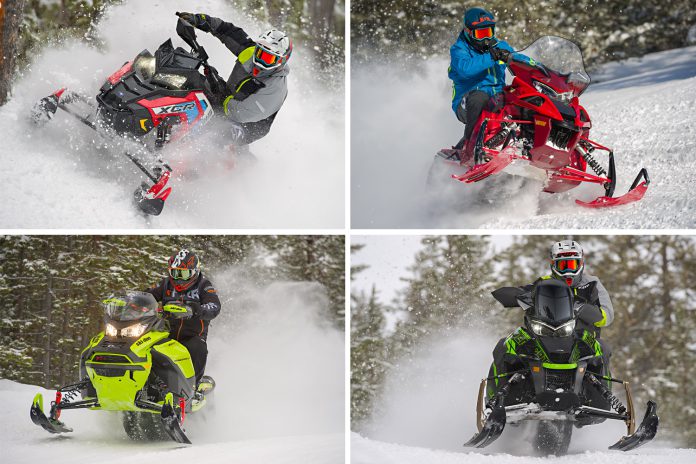 These enlightenments are based on opinions gathered from staffers who spend their days propagating fiction and/or truth at the water cooler in the well-lit Supertrax/Snowtrax, fully deodorized research center.

It’s pretty clear Ski-Doo has a near-stranglehold on market share in the snowmobile industry. The brand’s success is so profound it makes the suggestion it might actually need something a little risky.

Not too risky, though, so we’ll run with this thought: The G4 chassis is bristling with interesting and functional new technology. The G4’s engine selection is the most diverse and broad in the industry. The rMotion skid continues to be the benchmark for trail ride quality.

Ski-Doo does so much that’s right, however, this one issue – front suspension handling on trails – continues to be less effective than Polaris’ AXYS IFS.

This might be the easiest OEM suggestion. Polaris needs a 4-stroke. Clearly, Polaris has been on a roll the past four years netting the brand increased market share.

The success of the new Indy XC chassis with Pro CC suspension and legendary Polaris IFS up front has been pulling buyers back to the North Star brand.

Why? Because the sled works. The new 850 Patriot mill has set a new benchmark in the 2-stroke performance stakes and does it with less vibration than many 600s. These notable accomplishments have come without the presence of a single 4-stroke model.

So, if Polaris can grow in the face of a formidable competitor like Ski-Doo, which owns the 4-stroke market, why does Polaris need a 4-stroke?

Clearly there’s an increasing group of established enthusiasts who buy 4-strokes from the other three OEM’s on a regular basis. These buyers are now entrenched in the 4-stroke paradigm and will stay on 4-strokes for the rest of their riding days.

Don’t forget this reality. The best way to gain market share in this biz has been and continues to be targeting buyers from your competitors. Need I say more?

Clearly the rebranding of Arctic Cat’s Norseman 600 DSI 2-stroke utility/sport ride created quite a stir with Yama-loyalists. The number of views generated from that article on supertraxmag.com was crazy.

So what exactly would be the right 2-stroke sled to intro? No question, no doubt, a rebranded Arctic Cat 800 M series with Alpha suspension.

Like the 4-stroke market, the mountain market is simply too big to not address. The question begging to be answered is this: Does Yamaha need to build its own 800 engine or could it use Arctic Cat’s new SDI 800 twin? Yamaha does own a proprietary 2-stroke Direct Injection system called Yamaha High Pressure Direct Injection (YHPDI) and I have little doubt the company could spin out an 800 2-stroke twin in its sleep.

Having said all this, we think it makes more sense to get into the mountain genre with a rebranded AC engine and chassis and enjoy sales success before committing to a full-on Yamaha-built, 800 2-stroke.

No doubt about it, Cat needs an updated rear suspensiion for its trail-based 129 and 137 ProCross models.

The venerable Slide Action skid used in these models has provided excellent ride sensations over the years but what has to be accounted for is this: The first ProCross sleds with this skid were delivered to the market in 2012. By my calendar, that’s eight years. In this business that’s simply too long without an upgrade.

For sure, the Slide Action front arm concept has been copied in the industry by Cat’s competitors, particularly on race sleds, and it’s proven the setup is a great idea that works and works well.

However, in the current marketplace, both Ski-Doo and Polaris have made huge strides with each of their rear suspension systems. I can’t imagine there isn’t a prototype skidframe sitting on a bench in Thief River Falls and ready to go.

With guys at the controls of Arctic Cat engineering like Brian Dick, a man who knows suspension and understands obsolescence, we gotta believe something interesting is in the wings.