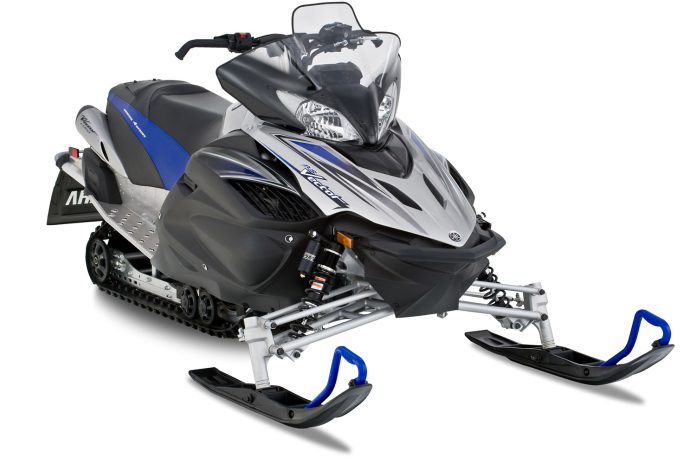 This may be a bit of a rare find because there weren’t a lot of them sold with a 137-inch track; most were the vanilla Vectors with a 121. Back in the day, Supertrax argued the Vector LTX was more of a long distance trail sled than a crossover because of its 4-stroke weight.

Probably true, but ten years later, who cares? You’re going to be buying a sled this old for its condition and its reputation for reliability. That’s where the Veck delivers in spades!

Yamaha kept building this sled for a long time after 2011 and probably the sum total of all the years it was offered adds up to a significant number of them still being available.

They were as tough as anvils and built to last and the later EFI 1049cc Vector models like this one were fuel efficient and strong running triples. They used KYB piggyback gassers up front with clickers and a single KYB gasser in the Monoshock RA136 skidframe with an adjustable damping dial on the tunnel to fine-tune the ride. There was also a 1.5-inch-deep RipSaw out back.

These sleds rode great, were reasonable handlers despite their extra mass and the 1049 never failed to impress.

Any Vector from 2011 is a safe buy and we can almost guarantee it will still have a lot of great service years ahead of it.

I have to say I apologize to all our manly, hairy chested readers for allowing my eyes to well up with tears while discussing this iconic Yamaha.

Here’s where I lost control of my otherwise steely emotional posture – it was when Kent mentioned the single shock 136 inch, remote adjustable rear skid. Why Yamaha walked away from this amazing – and I do mean amazing – rear suspension I’ll never know.

The left side tunnel mounted compression clicker was not just slick – it was the best idea ever for rear suspension adjustability. Vecks rode like moguls were just puffy white clouds flowing between its skis. A truly remarkable sled.

I must mention the 1049cc triple 4-stroke used in every Vector model. This engine is pretty much the same piece of Yama-reliability and performance as we see today in new Viper models. The engine delivers immediate and crisp throttle response from engagement to full whack and is still easily the nicest running quad-stroke in the biz.

One issue you will no doubt uncover relating to this sled is its resale value. You will find these high quality, made-in-Japan Vectors command a sizable premium over their competition. Take cash – and happy hunting!