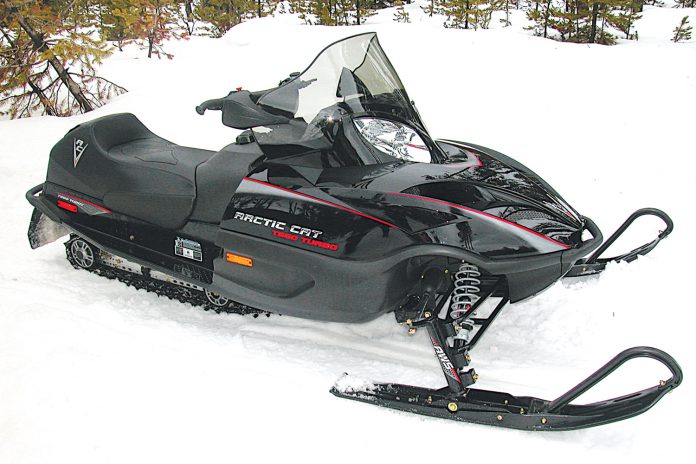 While the intro of the first Arctic Cat 660 triple cylinder 4-stroke barely blipped the meter, the exact opposite was true when the first factory turbocharged 4-stroke landed.

Amazingly, the braintrust at Cat figured a way to shoehorn a complete built-for-automobile-use power pack into the ZR chassis.

The turbo sat high-up, just under the windshield and glowed like a jack-o-lantern on WOT pulls down Kevlar Lake.

The reality of the T660 Turbo was this: The 110-hp triple produced enough turbo lag to allow for a light nap between whacking the flipper and feeling the boosted response.

Even though the engine didn’t produce the gargantuan HP the faithful dreamed of, the T660 worked its way into our hearts. I can remember giggling every time the boost finally lit up in the combustion chamber and the full 110-hp surge hit the clutches. At that moment the sled would rock back into the rear arm and haul!

The turbo surge was an experience snowmobilers were unfamiliar with and thus the T660 proved a very important point: Turbocharging could work on snowmobiles. It was only the beginning.

Later in its career the turbo 660 found a home in the Turbo Touring two-upper. This turned out to be a great place for the engine as these sleds became legendary for both high mileage, durability and stellar fuel economy.

We’ve met 660 Turbo owners with more than 25,000 miles on their Suzuki engines. As a result they still command respectable jing.