ALL ABOUT A NEW ENGINE 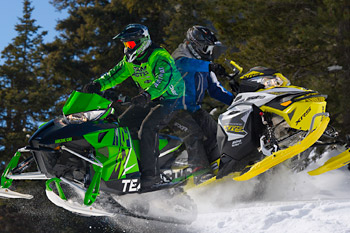 The buzz in the sno-mo biz right now centers on the expected arrival of new engines for MY2017.

It is not just time, it’s past time for SD to launch a new engine platform, particularly a new E-TEC DI 2-stroke.

Something else is unique about Evinrude’s flavor of E-TEC and it’s something we think is overdue for Rotax snowmobile engines using E-TEC DI. Fully stratified Direct Injection.

The outboards use a second-generation hammer head, voice-coil injector compared to what we’ve come to know since 2008 on Ski-Doo E-TEC sleds. This new injector delivers a stratified (read: lean) charge across the entire RPM operating range. E-TEC injectors on Rotax snowmobile engines produce stratified combustion to just above idle RPM.

The reason we’re amped about E-TEC II, as we believe it will be called, is power. The leaner the mixture the more power the engine will make.

The other benefit will be even better 4-stroke-beating fuel economy and of course, reduced emissions. We’re pretty sure Ski-Doo will show us a new engine next month. Whether it’s a 2-stroke or a turbocharged 4-stroke is the big question.

You don’t have to be too in-tune with the calendar to realize Arctic Cat has to be readying at least two new engines.

First, there’s little doubt a slot injection DSI 800 must be well along in its development. Will we see this engine next month? We don’t know, however we would wager substantial jing on the arrival of a reinvigorated, domestic built, Arctic Cat 800 twin with the company’s dual stage slotted piston injection system in the next twelve months, max.

The other engine story at Cat has to be the emergence of more Yamaha power. Five years ago we were told MY 2016 would be the last year for Suzuki power and we think this makes even more sense knowing in the ensuing five years Arctic Cat and Yamaha entered into a co-operative engine supply/manufacturing agreement.

If you read the Supertrax interview last month with Cat’s snowmobile VP, Brad Darling and Peter Smallman-Tew, snowmobile VP at Yamaha, you heard clearly the marriage is going very well and that we should be ready for something pretty impressive soon.