A TALE OF TWO TURBOS 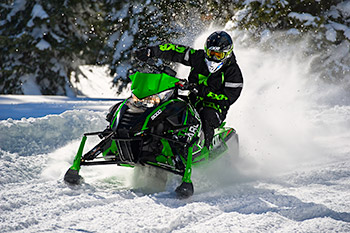 Last weekend we rode two turbocharged sleds back to back for 140 miles, a 129-inch 9000 Series Cat stocker and a Viper SE with an MPI aftermarket turbo kit prepped by Yamaha Canada. We were surprised and impressed.

Earlier this month you read our report on our experience riding our 2015 9000 Cat back in December and how buzzed we were with the sled’s seemingly endless supply of power and torque.

Frankly, we were unable to reach the sled’s top speed given the distance and icy conditions we were testing it on. We did see 118-mph, however, and decided that was good enough for that day.

Naturally we were skeptical about the Yamaha’s ability to keep up with the Cat and were doubtful an add-on turbo could make the Viper perform anywhere near close.

We ran the daylights out of both sleds on several hard-packed lakes, drag racing them when the coast was clear and came away impressed. The sleds were dead even – almost within a sled length every time we ran them head-to-head. One time it would be the Cat, the next time it would be the Viper.

When we compared the drive-ability of the two sleds we were really blown away with the Viper. Throttle tip-in was very linear and predictable – not much different than a stock EFI 1049 – until you pinched the flipper to the bars and then the sled just rocketed away.

We found the power delivery was much nicer than the 9000 when trail riding and the sled even felt way lighter over the skis. As a matter of fact, the Viper felt lighter overall, period.

We’re not sure if this is because the 1049 is a bit lighter than the 9000’s 1056 twin (it is), or if the Yamaha turbo kit has less paraphernalia than the 9000’s, or both. It could also have been the skidframe’s front arm settings taking some weight off the skis, dunno.

We also noted less residual turbo noise taking place under the Viper’s hood as the waste gate opened and closed on the turbocharger and as pressure was popped-off. Keep in mind, the stock Viper is a throatier sounding sled than the 9000 but we didn’t find it to be a lot noisier than a stocker.

All in all, the Viper with a turbo is like a puppy dog on trails and turns into a monster when you get it out in the great wide-open. Clutching was flat-out excellent.

We rode it hard all day and the sled ran and performed exactly the same at the end of the ride as when we began. Worthy of note was that we all agreed the rear suspension calibration was much better on the 9000 but the overall driveability of the Viper was truly impressive.

We think the 1049 triple with a turbo would be a great and logical substitute for the current Suzuki twin in the Cat someday and who knows, maybe even as a super-performance Yamaha production sled.

Kent Lester
Kent Lester is Co-Publisher of SUPERTRAX Magazine and a regular contributor to this website.
Previous articleTEAM ARCTIC FIRST AND SECOND AT SOO 500 ENDURO
Next articleWINDSHIELD MYTHS BUSTED