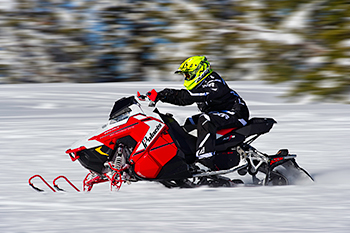 Low windshields on trail snowmobiles have been a bone of contention around the sunny offices of Supertrax for a few years.

Yes, we see the merit of a super-low windshield on mountain or freestyle sleds being ridden in powder, but what’s the deal with OEMs putting those “thong” windshields on trail sleds?

It seems a lot of snowmobilers think they’re actually penalizing themselves by having a mid-height windshield on their sled. They argue their sled actually goes faster when they have a low windshield on it and a higher one would slow them down.

This sounded fishy to us and, despite the fact the low windshield look seems like it’s more attractive and adds speed, we weren’t convinced.

We spoke to an aerodynamics expert about this and he told us the most aerodynamic thing on a snowmobile is actually not on the snowmobile. It’s not the hood, not the windshield, but rather the rider’s helmet.

The least aerodynamic thing is the rider’s body. Anyone who has blasted a lake at the C-note with a low windshield knows how much air resistance there is pushing against your chest, almost like a giant hand trying to push you off the back of the sled.

So, logic would tell you, a good windshield that directs air to the upper half of your helmet and away from your body would be the best way to overcome aerodynamic drag. Less drag means more top speed and that’s the biggest hold-back for so-called “windshield-wise” riders who want to go faster.

Certainly a windshield that’s too tall or too large works against the principle we’ve outlined, but there are plenty of good ones from every manufacturer that will not only give you a more slippery profile but will keep you warm and comfy all day, too.

Kent Lester
Kent Lester is Co-Publisher of SUPERTRAX Magazine and a regular contributor to this website.
Previous articleBest Crossover Snowmobiles
Next article600 OR 800 – WHICH IS BEST?