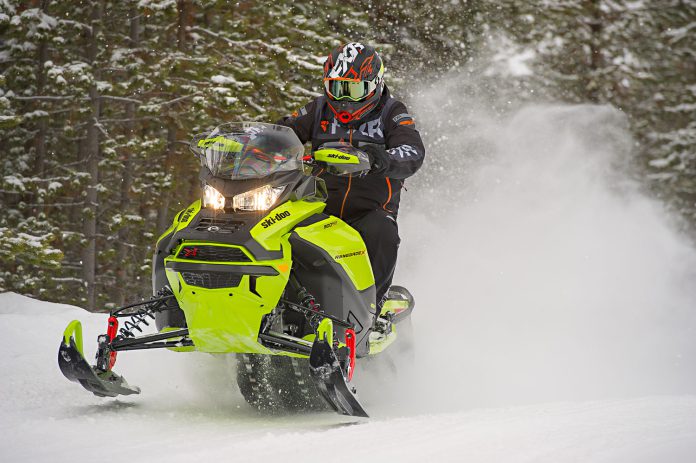 The big question on everyone’s lips was, would snowmobilers gravitate to the much more powerful Yamaha (180 claimed horses) and overlook the new Ski-Doo (150). Your response numbers for that posting were huge and obviously, we struck a nerve.

The tallies are in and the Ski-Doo 900 ACE turbo did very well in the sales column last year, matching sales with both the Arctic Cat 9000 and the SideWinder.

Yes, you could argue that Ski-Doo buyers were panting for a new, more powerful 4-stroke – especially since the popular but long-in-the-tooth 1170cc, naturally aspirated 4-TEC had been discontinued, and were simply jumping on an otherwise empty bandwagon.

Good point, and consumers should strongly be advised that a 50-horsepower differential (claimed 30) is still a big gap in the marketplace.

Sometimes an OEM can rely on sales successes to assume they’ve hit the market square on the head and sit tight with what they’ve got. In this case, we’re wondering if that may be a big mistake.

Historically – and not that far back in the past – there have been dramatic snowmobiles that were a huge success when they were first introduced and then sales numbers dramatically toppled in the ensuing year or two and they disappeared from sight.

We’re not sure if this could be the case with the 900 ACE but Ski-Doo should be thinking about reaching into its bag of tricks to make the ACE-T more attractive to buyers looking for ultimate power.

The truth is, both the Cat 9000 and the SideWinder are very attractive sleds and have a ton of goodness to offer. We haven’t been in on too many fly-on-the-wall eavesdropping conversations with 900-ACE owners yet, but how many times do you need to get pulled down the lake by a Cat or Yamaha before wondering if you should have bought the sled with the most power? These buyers would be the people who subscribe to Mark’s theory that “no matter what, snowmobilers always gravitate to the (most) power!”

We’re thinking Ski-Doo is well aware of this and has already got an upgraded ACE model ready to be shot out of its marketing cannon. Lets call it the ACE Turbo R. We see it as a pumped-up 900 with a slight bump in displacement to about 950ccs and an uptick in boost from the turbo. This would put the new engine right in Yamaha’s claimed 180-hp power wheelhouse and make it truly competitive.

The question is: “WHEN?”

We don’t see it for model year 2021, but we’re betting there will be an alternate ACE Turbo R for MY 2022. By then, who knows how far over the top Cat and Yamaha have gone with their turbo sleds?