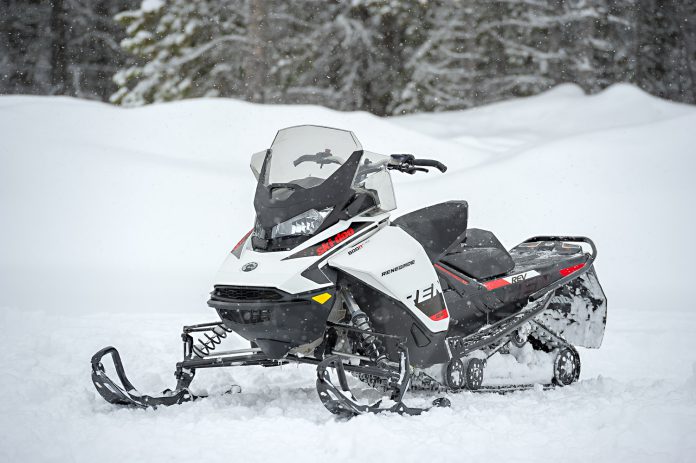 Ski-Doo first introduced E-TEC Direct Injection technology to the sno-mo-industry in 2008. Originally developed in Austria by Ficht, BRP bought the former Outboard Marine Corporation (OMC) who owned Ficht and proceeded to adapt the technology to snowmobiles labeling it “E-TEC”. Up until this time the system had only been used on Evinrude outboard engines.

Direct injection (DI) differs from all other 2 stroke induction systems in that absolutely no fuel enters the engine’s crankcase. The throttle bodies allow only air to enter the engine’s bottom end.

While air is pumped upwards to the combustion chamber via conventional transfer ports oil is pinpoint injected onto the rod bearings and piston skirt. This oil slowly migrates up the transfer ports and is ultimately burned.

Since so little oil is involved as a result of keeping fuel out of the scavenging process (which would normally wash down the bearings) there is almost zero smoke and odour associated with the system. Because fuel is injected so late in the 360 degrees of crankshaft rotation, virtually no unburned fuel escapes into the exhaust system.

E-TEC’s hallmark feature is its electronic voice coil injectors externally mounted on the cylinder head over the combustion chamber.

Voice coils use a similar process as stereo speaker magnets to produce pulses of fuel to the cylinders. The injectors pulses take fuel from relatively low pressure to over 2000 psi in less than the blink of an eye.

The voice coils literally hammer fuel into the cylinder with each pulse. The sled’s ECU (computer) adjusts the stroke of the voice coil injector pin to meet the engines demands determined by the ECU.

The “magic” of the E-TEC system is this. To ensure no unburned fuel escapes out the exhaust port the voice coil injectors are able to introduce fuel into the combustion chamber after the exhaust port is closed.

With only 15 degrees of crankshaft rotation left before the spark plug lights off the compressed fuel and air virtually no fuel escapes out the exhaust port.

Other than a higher cost to manufacture compared to other 2 stroke SDI injection systems there’s no downside to E-TEC. BRP is able to deliver the cleanest running, highest efficiency, low emission 2 stroke engines in the biz as a result of E-TEC’s sophistication.

One more E-TEC benefit is easy starting. Due to its high pressure injectors and high voltage electronics, an E-TEC engine only requires a 120 degree rotation of the crankshaft to start it. That’s why the revolutionary “SHOT” electric start system is possible. E-TEC atomizes fuel so efficiently the engine lights-off with only a tiny bit of crankshaft movement.

The new 600R engine with E-TEC sets the bar very high for snowmobile power and performance as well as efficiency and cleanliness.