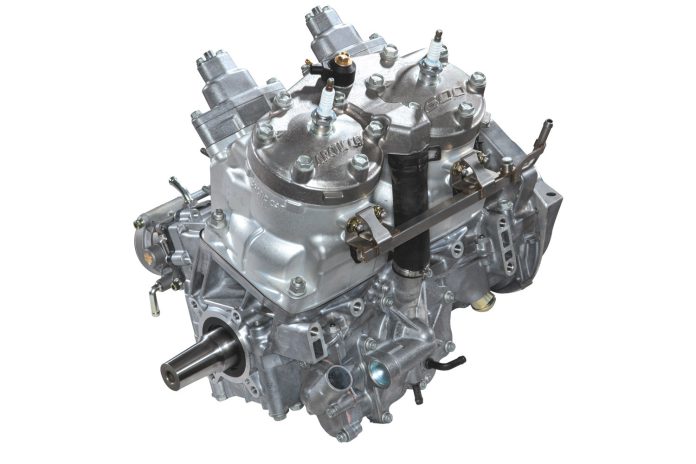 Although it’s been around for nearly five years, Arctic Cat’s Dual Stage Injected (DSI) 600 is the most recent of the new-age EPA-friendly 600s in the snowmobile marketplace.

In order to understand the difference between DSI and SDI, you need to have an understanding of what is happening inside a 2-stroke as it moves through its cycles (see Part I), keeping in mind the position of the piston as it moves upward and downward closing and opening the exhaust port.

The general idea is to get the exhaust port closed off by the piston during compression and ignition and open again immediately after ignition to exhaust the ignited gases.

Unlike Polaris’ SDI system, Cat’s engine locates the fuel injectors on the side of the cylinder and not inside the transfer or boost ports.

It then proceeds to top dead center and is ignited (DSI has already mixed a small quantity of oil into the gasoline in the fuel rail).

Two things have been accomplished here: First, a very lean and relatively pure fuel charge has been delivered to the combustion chamber and, second, enough oil is present in the fuel charge to lubricate the piston rings and cylinder walls.

As the slot passes the injector and the piston moves upward toward top dead center, at higher engine speeds the injector continues injecting gasoline (mixed with the aforementioned oil already pre-mixed in the fuel rail) through the slot where it targets the piston pin and top rod bearing. Because gasoline has a cooling effect, this also keeps crankcase temperatures low.

Meanwhile, oil is being pinpoint-injected onto crankshaft and lower rod bearings and is precision regulated as required by the ECU and the DSI’s electronic oil pump located in the oil reservoir.

Two more benefits have been accomplished in this second stage: 1. Adequate lubrication of the bottom end and 2. A cooler crankcase.

Despite the very good lubrication qualities of DSI, because it runs very lean, the engine still uses a knock sensor warning the ECU to slightly retard the engine’s timing if combustion chamber temperatures rise too high and cause detonation. Once again, the knock sensor operates so subtly you’d never be able to detect it working.

Some have asked the question: “What about the transfer ports? Does DSI even need them?”

The answer is, “Yes, absolutely!” Remember, the throttle bodies are still delivering air to the crankcase and the positive pressure of the descending piston is transferring the necessary oxygen to the combustion chamber via the transfer (boost) ports so the whole combustion process can work. DSI is mostly about fuel delivery but air delivery is normal 2-stroke science.