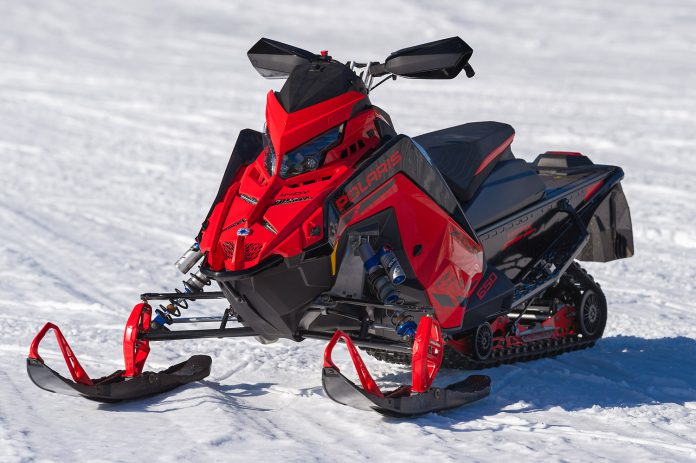 The XCR moniker has been in play for literally decades. The early years of XCR saw the legendary Indy, all-aluminum, trailing arm chassis rule terrain and sno-X racing in the early 90’s. The sled was incredibly light, had steering and suspension geometry developed in the ditches around Roseau – and beyond. The sled flew like a Cessna and consumed terrain with a venomous appetite.

Those original Indy XCR’s were powered by Fuji 440cc piston port twins until when early in Polaris’ domestic engine program, the company released a Liberty 440 twin with read valve induction and torque-generating exhaust valves. Throughout the early and mid 90’s, the XCR was the benchmark for terrain-consuming prowess.

Yes, Cat’s ZRs were potent and Ski-Doo was making huge cred gains in the Midwest with the MX-Z – first in the “S” chassis then in the “ZX” platform. Those times were the roots of Polaris’ terrain racing success. In those days the XCR was the archetypical racing snowmobile – and everyone knew it.

Fast forward to today’s marketplace and witness the XCR, circa 2021. The current MATRYX chassis now carries the XCR’s legendary trademark and it does it with credibility and legitimacy. I could spend the rest of this report discussing the MATRYX XCR’s compression and rebound adjustable Walker-Evans 2.0 racing shocks, the billet rear scissor stops, the oversized racing brake rotor and bigger caliper along with high performance brake pads and the legendary XCR brake air scoop. But I won’t.

This time around it’s all about the XCR’s ultra-potent Patriot 650 twin. In my humble opinion, the 650 speaks to the roots of what XCR really STANDS FOR. Sure, there’s an 850 XCR – and it is a cannon. However, the XCR is about ditch banging, technical rough terrain navigation and telepathic corner carving on the twistiest trails known to man.

To navigate this kind of terrain you need power that’s torquey, seamless and explosive at the big end. You need an engine that’s much more than the sum of its parts. Literally you need a 650 that thinks it’s an 850. That, my friends, is exactly what you get with the new Patriot SDI 650.