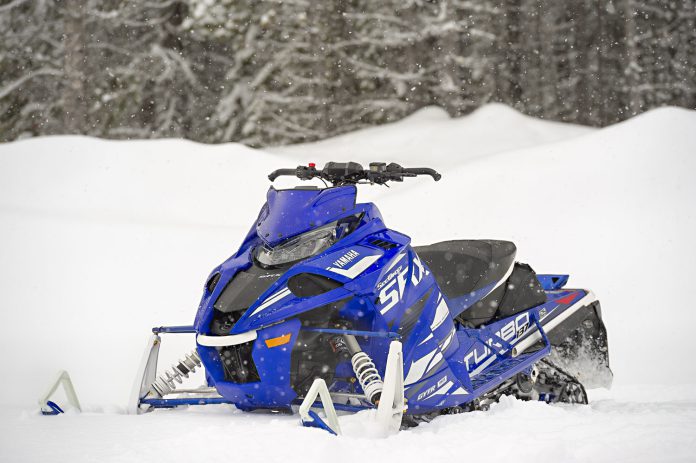 The SRX has a few distinguishing features that carve it out from the mainstream. In a move many questioned at its announcement, Yamaha has lowered the SRX’s ride height a total of an inch. In today’s world of long travel suspension and deep stroking shocks, this seems like a step backwards. Yamaha figured out a way to keep the SRX’s center of gravity low, low and still deliver good ride results. Yes, the answer is technical and… expensive.

Up front, the engineers chose dual rate springs to deal with the increased sag built-in and then added “low preload” rear shocks. Check the specs and you’ll find the SRX actually has the same amount of suspension travel as other SideWinders but when you’re sitting on it, the suspension sag drops your butt an inch deeper into its travel.

The end result is that the sled feels like it’s sitting lower – and in fact, is – but you still have the same amount of suspension movement when the sled is static. Why do this? Like we said, a lower sled has a lower CG so its mass is closer to the ground. But more than that, this SRX rails corners and keeps the skis planted without a lot of ski-lift as its suspension unloads right to left and back again.

In technical sections of trail the lower CG also tends to counter the feeling of top-heaviness often attributed to heavier 4-strokes especially with turbocharger plumbing.