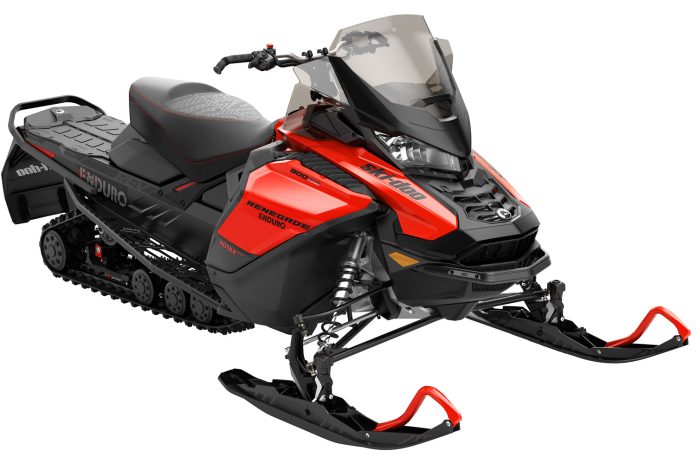 Last March we received a 2019 Ski-Doo G4 Enduro at Supertrax headquarters and had a chance to long term test ride it.

This version of the Enduro was particularly interesting to us because it came with Ski-Doo’s new 900 ACE Turbo engine. Keep in mind, the Enduro is available with four engine options: 600 and 850 2-strokes, the naturally aspirated 900 ACE and this turbocharged one.

We had experienced an abbreviated sampling of the sled in West Yellowstone in February but did not have the opportunity to thoroughly wring it out at real-world altitudes and snow conditions until we had this particular one in March.

The Enduro represents a sled appealing to a specific market segment and that segment has been changing the last few years. Once shunned by ultimate performance riders, the Enduro, equipped with top performing engines, is definitely a sled those hardcores are considering today.

Adding-in all the sizzle of the G4 platform and suspension adjustability makes the sled more appealing. Frankly, its ride and handling so closely mirrors a conventional 137-inch Renegade, there’s no difference.

What is different is a bit of extra weight from the air suspension apparatus – and that is definitely worth every ounce considering the comfort and adjustability it adds!

Yes, the G4 Turbo is heavier than the 2-stroke equipped Enduros but with the modified chassis (wider to accommodate the 4-stroke) and other engineering tweaks, the extra mass is well camouflaged.

If anything, as a trail-honer, the 150-hp Turbo, with its mountainous torque, may actually be first choice for the Enduro rider. We heard someone tell us, “This sled was designed to be a 4-stroke sled and actually acts best in that format”.

Those points are all arguable – especially if you’re a 2-stroke addict – but we think 4-TEC graduates are going to be very pleased with the handling and overall demeanor or this turbocharged Enduro.

The first question you’ll ask is: “Is this sled fast enough to justify a transition from a naturally aspirated 4-TEC to this pricier, more complex sled?”

Some of it is simple ergonomics, the rest is engine placement and chassis balance. The fact this turbo engine weighs very close to the 4-TEC without a turbo is significant and means you can make a better evaluation.