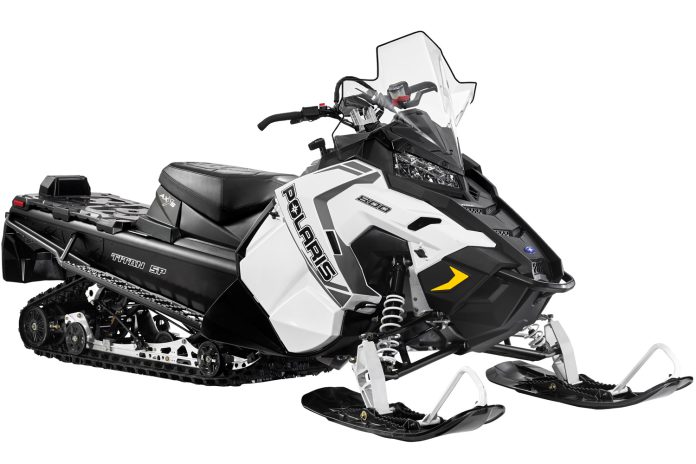 You may be thinking the industry has gone nuts when you read about sleds like the new Polaris Titan SP.

At first glance it looks like a performance sled. However, it seems like the Titan SP breaks every rule of performance snowmobiling: It’s huge – but it’s got a big, powerful 800cc 2-stroke.

Its massive track is 20-inches wide and 155-inches long. Yeah, plenty of surface area – but what about all that power-robbing weight?

It’s supposed to be a utility-style sled because it’s got wide workhorse skis and an articulated rear suspension, but it’s got mountain style PowderTrac running boards and all the hot rod electronic features of a top performing trail or mountain sled. What’s up?

We don’t know either, but this sled is a blast to ride. We suspect it’s designed to compete head-on with Ski-Doo’s Expedition Extreme – also a utility-adaptable sled with pared down looks and an 800 2-stroke under its hood.

Comparisons aside, the market for these sleds is to regional North American riders who boondock a lot and, especially, to Northern Europeans who ride Scandinavian terrain where there may or may not be groomed trails.

We rode the Titan last winter and were shocked at its maneuverability and light ergonomic feedback when you’re in the drivers seat. It handles and steers like an Assault and its suspension is as good or better than any trail-targeted Polaris.

Although the seat is wider because of its wide tunnel and track, it never feels cumbersome or particularly bulky. Five minutes in the cockpit and you feel right at home, honing twisty trails and launching into powder. The sled is surprisingly responsive to its driver’s body-english and responds off-trail like a good mountain sled.

We think some of this ergonomic bliss may be because the weight of the sled is pretty well-balanced. A front-weighted 4-stroke actually feels more intimidating in powder than the Titan but because the 800 is light and the weight of the engine and drive system is parallel throughout the chassis front to rear, it handles deep snow challenges really well. Fast? Plenty.

We’re curious to see how the Titan SP sells in North America. We know for sure there are riders in Maine, Northern Ontario, Quebec, Newfoundland and Labrador that have been waiting for a sled like the Titan.