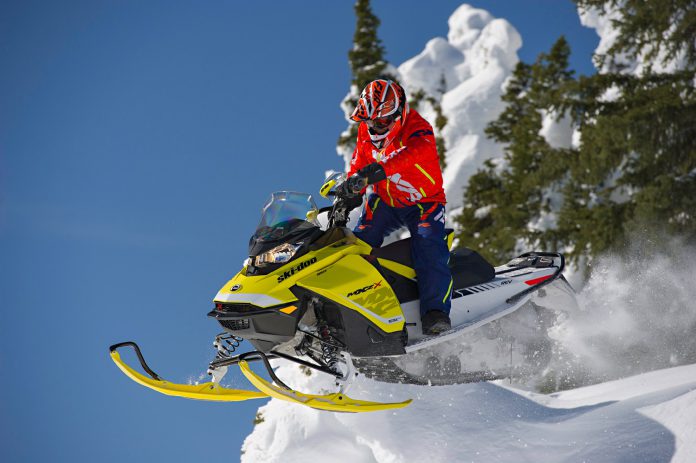 Ski-doo is openly admitting it is tired of acronyms. That’s good news although it does make the launch of a new REV a little less glitzy. The braintrust and marketing staff at Ski-Doo told us it’s okay to call the new REV, “Gen-4”.

The engine is all-new and comes with this claim: “This is the first 2-stroke snowmobile engine built to be as reliable, durable and long lasting as a 4 stroke”. Really?

Here’s why Ski-Doo is making this claim. The new 850 siamese cylinder, ultra-narrow twin uses forged aluminum pistons with forged steel ring lands. Each piston is encircled with a band of steel that carries the rings. Can you say ‘diesel’?

Here’s what reminds us of diesel construction: The crankshaft is lubed with pressurized nozzles firing oil at the big end, small end and crank bearings including the double row, fully open bearings on the mag and PTO ends. No more hundred-buck-a-tube mystery goo lubing the PTO bearings!

That’s the durability story; here’s the beef. The new engine puts out, at Ski-Doo’s admission, a full 165-horsepower and after riding it, we believe it.

Polaris set the bar high with the Liberty HO the past two seasons but Ski-Doo knew what it were shooting for and has hit it dead-on. Bam! New king-of-the-hill.

The 850 is ultra-narrow – by over 4 inches – as a result of a new super skinny stator on the right end of the crank. The engine looks odd as the tubular mag end casting on all previous snow-mo 2-strokes is gone.

The engine is further narrowed by the use of the new, revolutionary P-Drive roller tower primary. The engineers also built in more lightness by using a – guess what? – 2-pound lighter crank. Where have we heard that idea before?

Fuel is delivered by new E-TEC lighter and more efficient injectors. Triple stage, cable activated (not pressure) RAVEs round out the package.

Geometry up front has been altered, adding an extra inch of travel. The steering system (only on X packages) uses a bump-steer eliminating rack.

This one will bend your mind: The rider is moved ahead (yep, ahead) another 4-inches on the Gen 4 platform. This is accomplished because of the narrowed and centered engine, allowing the pilot to get their knees way, way forward – almost on top of the spindles – when carving white top.

The side panels are narrowed by about 2-inches per side and the sled’s nose is notably shorter. Ski-Doo claims to have further centralized mass by not only paying attention to the front-to-back plane but the side-to-side location of engine.

Moving to the back end and when viewed from the rear, the tunnel uses a pyramidal shape. This is an Arctic Cat trick making the sled feel narrower between the knees. The entire tunnel top is a smooth, stamped aluminum heat exchanger which looks very unusual because it has no fins. Ski-Doo claims it’s more resistant to stud penetration and will have tunnel protectors available.

The battery now resides in the rear of the seat. rMotion returns with minor tweaks but is essentially the same, excellent suspension we’ve come to love. The rider’s feet are now fully exposed allowing for contorted movements when railing twisties.
Ski-Doo is making available accessory toe-holds and close-off parts for more traditional riders.

This is where the Gen-4 departs from all previous REVs and every other sled in the biz. The rider is able to use the far-forward seating position to employ gymnastic– caliber body-english when railing.

The adjustable parallelogram handlebar riser pulls the rider forward and onto the unusually narrow front section of the seat. The seat also allows for traditional ergonomics with a large flat-top rear section. This idea is strangely similar to the Polaris flat top seat. When seated way-up front the sled responds with linear turn-in and an amazingly flat cornering posture.

The XS/XP’s nervous, heavy steering feel is gone. The sled is completely settled on-center – way beyond the XS RAS 2.

The side panels have a unique profile Ski-Doo calls “Ergo Step” and they’re designed to make it easier to get up on the front end. Instrumentation, switchgear and skis are the only carry-overs we could see from the XS. Virtually everything else is all-new. Ski-Doo is promising its LINQ accessories will interchange for the most part, however, look for a new LINQ 2-up seat.

After riding the Gen-4 REV we’ve come away both shocked and impressed. The shock? Incredible power and the P-Drive primary’s ability to get that power into the snow. The engine spools with lightning speed – like an extension of your synapses! Think it and you’re gone!

The P-Drive generates tangible benefits, not the least of which are immediate, fluid upshifts. In case anyone is wondering, the roller tower concept is not only the future for Ski-Doo, everyone needs to move in this direction over the next few years. The concept is mechanical art.

We were skeptical when Ski-Doo unveiled the Gen 4 to the international media earlier this winter. When we were told the rider has been moved another 4 inches forward, we thought Ski-Doo had lost its collective mind. It hasn’t. In fact, the new Gen-4 REV moves into a challenger position for best handling against the much loved Polaris variable castor IFS we’ve knighted best-in-biz.

Although we’re not prepared to say the new REV Gen 4 handles better than a Polaris, it does however, handle exponentially better than the XS. The experience is different than Polaris’ variable castor design – we won’t know if its better until we get these sleds nose to nose.

Stay tuned to hear more of our riding impressions and analysis of this very unique, very different snowmobile from the sport’s market share leader.