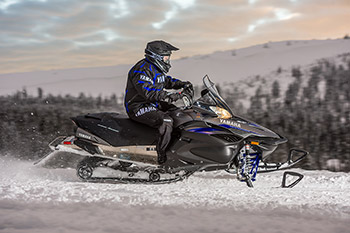 For those who thought the Vector was going to be deleted from Yamaha’s 2016 line-up, there’s big news.

Yes, this original, all-Yamaha snowmobile will see some of the biggest changes it’s had since its first-version intro back in 2004.

We’ve often commented on how we always hoped Yamaha would stick with its mono-shock rear suspension and maybe even find a way to use it the Viper. We were taken by surprise to see a completely re-thought version of a single shock skidframe for the Vector (and Apex) this year focusing on extreme weight loss.

It’s called the SingleShot suspension and it’s now available on the Vector in 129 and 146-inch (X-TX) lengths.

You don’t have to look too hard to see where the weight has been pared either. A lighter, premium Fox Float 3 XV air shock is located on a completely different plain than the old KYB coilover monster on the Monoshock and there are now adjustable coupler blocks relocated further forward instead of the Monoshock’s older and heavier coupler rods.

Keep in mind the former Veck was available with only 121 and 136-inch track lengths but the new skid has allowed Yamaha to reduce weight in the trail-length skid (129) by over 10-lbs compared to the 121 and deliver a larger footprint with more floatation.

There’s a claimed 9-lbs savings with the 146 over the 136. We haven’t sampled this skidframe yet but we’ve heard it works very well and is at least as plush as the old Mono. Also available is a 146-inch Vector X-TX with a 1.75 Backcountry track.

Another big feature this year is the reworking of the Vector and Venture’s 1,049cc 4-stroke. The engine has received a new crankshaft, pistons and rods and now features a 3-mode YCCT (Yamaha Chip-Controlled Throttle) system for better throttle control, fuel economy and trail comfort.

The YCCT’s drive-by-wire setup is similar to Ski-Doo’s ITC system and its D-Mode feature offers the rider different settings to suit different riders, particularly novice ones riding varying trail situations. The desired mode can be toggled from the handlebars and is displayed on the gauge panel.

The 129 version comes with a 1.25-inch deep RipSaw track and uses KYB gas shocks and Tuner skis up front. Power steering is still standard on all Vectors.