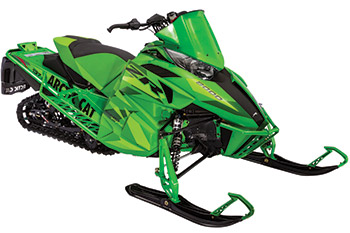 Although Arctic Cat hasn’t made sweeping changes to its trail marketplace for 2016 there are some pretty significant upgrades and differences.

This year, what was called the XF 137-inch crossover line-up is now under the trail banner as merely a ProCross 137 along with the ProCross 129 in LXR, Sno-Pro (and Limited) RR-Series and El Tigre versions of both track lengths.

A couple of big upgrades grace these models. For instance, all ProCross Cats get a set of TEAM clutches this year.

This is big news as Cat has produced its own clutches for many years with great success. The in-house rationale is that it cuts out a whole department of quality control, R&D and calibration. Besides this, the TEAM reputation for quality, durability and performance is simply beyond reproach.

Also, Arctic Cat has moved to drivechain and sprockets produced by Borg Warner for exactly the same reasons already mentioned.

There’s been big changes in suspension calibration for MY 2016 and although the LXR is not radically different, the Sno-Pro, RR and El Tigre have been tuned for more ride compliance.

We felt last year’s Cats (MY2015) were the best suspended Arctic Cats ever, but the brass feels its important, with the competition crowing about their own suspension compliance, for Cat to exceed in this important area.

This year you get a set of new 3-position Fox QS-3 gassers front and rear on the El Tigre. These shocks’ compression dampening can be adjusted for medium, hard and soft with just the twist of an on-shock clicker. The El Tigre and RR-Series are only available as a 129-inchers.

A new model called the ZR Limited is available as both a 137-incher and a 129 and comes with arrestingly cool graphics and a full set of 3-position QS-3s. The green 129-inch version is only available as an early order Cat.

Sorry to report there’s no new 800 DSI engine as we had hoped and predicted. We want it but apparently Cat is being very cautious about releasing new and not thoroughly tested engines out to the public.

Kudos for that and the current Suzuki 800 is a great, strong performing mill – we just love that 600, though and anxiously await the day a bigger displacement version arrives.